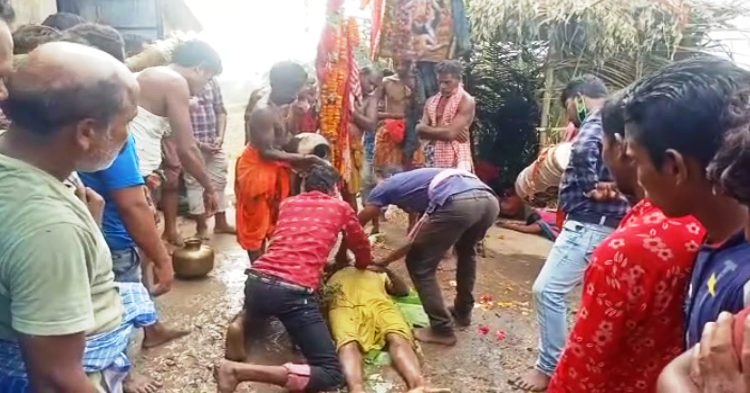 Nayagarh: Attempts to bring a dead back to life sound wired in today’s era, but such superstition still prevails in rural parts of the State.

An incident was reported from Barasahi village under Sarankul police limits in Nayagarh district where the villagers tried to resurrect a dead man but in vain.

According to reports, a traditional Danda Nacha was performed at Barasahi village on Saturday night. During the religious event, a performer fell ill following which he was rushed to the district headquarters hospital in Nayagarh for treatment. However, the doctors declared him dead at the hospital.

Following post-mortem, the body was brought to the village for cremation. However, the villagers with help of sorcerers performed rituals entire night to resurrect the dead man with a belief that the body was possessed by God. As part of tantrik methods, the villagers poured a plenty of water on the body and started rituals to bring the dead back to life.

In the meantime, police reached the spot and tried to convince the villagers citing it as ‘impossible’ act to breathe new life into the dead man. The villagers realised it and agreed to cremate the body as per Hindu custom. The last rites of the deceased person was performed today morning.