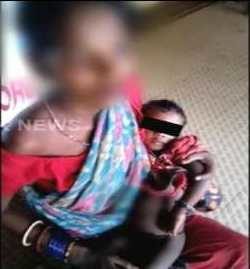 Keonjhar: In an era of science and technology dominating human thoughts, the superstition and blind belief still prevail in Keonjhar district of Odisha where a toddler was branded with hot iron rod to cure ailments.

The 18-month-old baby girl Amita Mahakud at Kusumita village under Sadar block in the district was branded with a hot iron rod to cure fever.

Another 120 COVID-19 patients recover in Odisha

After the toddler’s condition deteriorated, she was admitted to the district headquarters hospital for treatment.

According to reports, the toddler was repeatedly branded with hot iron rod by a sorcerer after her family approached him to cure her fever. However, she did not get well from illness. After her condition deteriorated due to repeated inhuman practice, the family brought her to Baradapal hospital for treatment. Later, she was to district headquarters hospital. Her condition is stable after treatment.