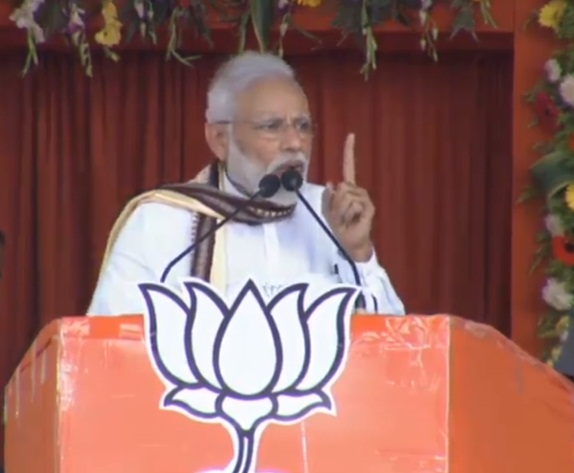 Sundergarh: Hitting his third election rally in Odisha within a span of 10 days, BJP leader and Prime Minister Narendra Modi once again lashed out at both Congress and BJD while underlining various achievements of the saffron party.

Addressing a public meeting here,Modi draw a line between the two parties and BJP and alleged that both BJD and Congress have encouraged favourtsim in terms of caste, religion and communities during their leadership keeping the entire eastern India far from development.

He said, “You have seen the works of Congress in the Centre during its decades-long leadership. You have also seen BJD ruling Odisha for the last 19 years. And now you have BJP’s works in front of you. This ‘Chowkidar’ has pledged and taken the responsibility to build the entire eastern India as the ‘development engine’ of the new India.”

In the same vein, Modi said, “India is now killing terrorists by entering their houses. The previous Government would never have thought of this surgical strike. The then Government would not have been competent enough to destroy terrorist camps by trespassing the Line of Control (LOC). This proves that the new India is emerging as a powerful nation,” Modi asserted.

The BJP asked the people as to whether lotus (BJP) should bloom in every Lok Sabha and Assembly Constituency to ensure ‘Majbhoot’ Bharat and ‘Majbhoot’ Odisha.

Further attacking the BJD over farmer issues, coal and chit fund scams, unemployment, Modi asked the people of Odisha whether they want to have an honest Government, who would ensure inclusive growth in the State as well as in the country or a corrupt and inefficient Government, who runs dynastic rule.

After addressing the gathering here, Modi left for Sonepur to campaign for party candidates ahead of the upcoming elections.

Naveen hits election trail, lashes out at Centre over ‘negligence’ towards Odisha