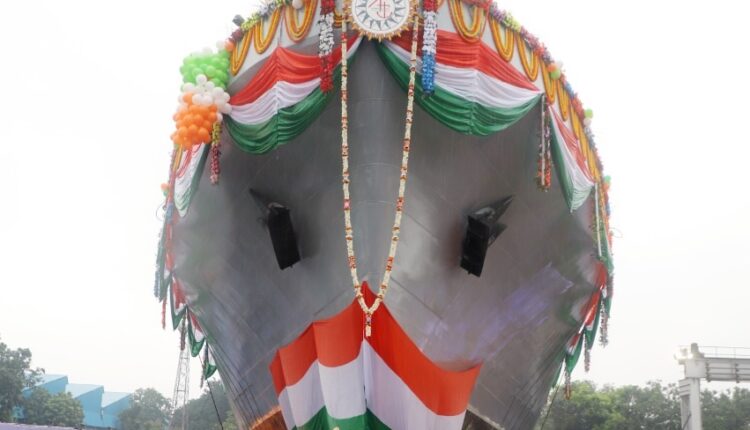 Formally launched on Sunday by Pushpa Bhatt, wife of Ajay Bhatt, ‘Sandhayak’ is the first in the series of four ships under the Survey Vessel (Large) project for the Indian Navy.

These survey ships are capable of full scale coastal and deep-water hydrographic survey of Ports & Harbour approaches & determination of navigational channels and routes. In addition, these ships are also capable of undertaking surveys of Maritime limits and collection of Oceanographic and Geographical data for Defence applications, thus boosting the maritime capabilities of the country.

These ships are propelled by two Marine Diesel Engines combined with Fixed Pitch Propellers and fitted with Bow & Stern Thrusters for manoeuvring at low speeds during surveys.

The ships are fully designed by the Design team of GRSE to meet the requirements of the Indian Navy and are being built and outfitted utilising the concepts of ‘Integrated Construction’ and in compliance with applicable provisions and regulations of the Classification Society (IRS).

Speaking on the occasion MoS Defence Ajay Bhatt said, “Launch of first Survey Vessel (Large) ‘Sandhayak’ today reinforces our commitment for indigenous shipbuilding as part of our Prime Minister’s vision of ‘Make in India’, and thrust to the vision of ‘Atmanirbhar Bharat’ (Self-reliant India).

“The vessel will have over 80 per cent indigenous content by cost and this will also ensure that large-scale defence production is executed by the Indian manufacturing units, thereby generating employment and expertise within our country.”

Rear Admiral V.K. Saxena(Retd.), Chairman and Managing Director said, “The Survey Vessel (Large) is one of our proud creations for the Indian Navy and coincidentally the previous ‘Sandhayak’ class of Hydrographic Survey Ships were also built by GRSE. The first ship of that class ‘Sandhayak’ got decommissioned in June 2021 after 40 years of glorious service to the nation and her name lives on in true traditions of the Indian Navy.”

The GRSE has delivered 788 platforms, which include 107 warships, of which 70 were for the Indian Navy, 35 for the Indian Coast Guard, one for the Government of Mauritius and one for Seychelles Coast Guard which is the highest number of warships built and delivered by any shipyard in the country.