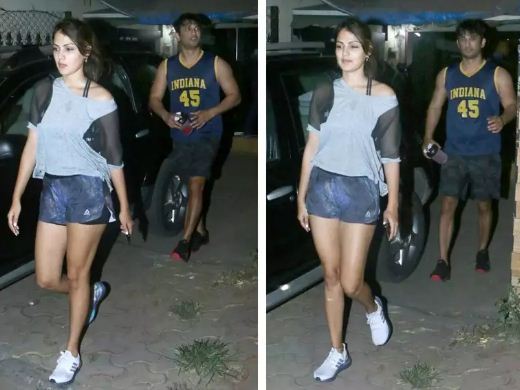 Mumbai: Soon after the news of actor Sushant Singh Rajputs sudden death sent shockwaves all over, an old picture of the actor with his rumoured girlfriend Rhea Chakraborty has gone viral on social media.

The photograph, in which they were spotted outside their gym in Mumbai, is said to be their last picture together. They were snapped together on March 11.

In the picture, Sushant is seen wearing a blue printed T-shirt and black shorts, while Rhea is seen in a galaxy print yoga shorts and a grey top.

Sushant and Rhea used to often workout together. They were snapped outside their gym several times.

In an interview to IANS, earlier this year, Rhea said she prefers no intrusion into her private life, and that is the reason she never reacts to the rumours of her relationship with Sushant.

Asked if all the recent headlines about their reported affair takes away her focus from work, Rhea had told IANS: “Sushant is a dear friend. I have known him for many years! No more comments on this.”

On Sunday, Sushant was found hanging at his Bandra residence here, by his domestic help who alerted the police.

The actor hailed from Bihar and was educated in Patna and New Delhi, before shifting to Mumbai.

After establishing himself on the small screen with “Pavitra Rishta”, he transitioned to the big screen with film “Kai Po Chhe”. He went on to do projects including “Shuddh Desi Romance”, the biopic “M.S. Dhoni: The Untold Story”, “Kedarnath” and “Chhichore”, among several others.

Did Sushant Singh Rajput reveal his state of mind in his last posts?

Hindus are the most tolerant majority in the world: Javed Akhtar