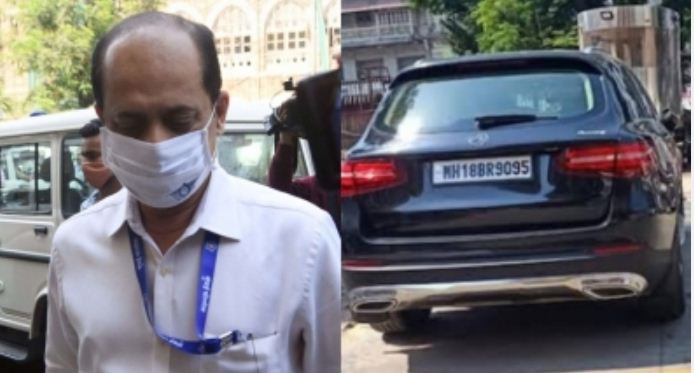 Mumbai: Continuing their probes into the SUV case and the death of Thane businessman Mansukh Hiran, the Maharashtra ATS on Monday raided arrested cop Sachin Vaze’s home and other places, while the NIA recorded the statement of his widow and others.

Through these SIM cards, the ATS is unravelling the movements, location and conversations of the accused.

Apart from Vaze’s house, the ATS team also searched a warehouse in Bhiwandi (Thane) to collect evidence, and a five-star hotel at Nariman Point where Gor had gone to meet someone.

An official said the ATS team took the arrested duo (Shinde-Gor) to the Thane Creek area where Hiran’s body was found on March 5 to analyse the crime scene.

The National Investigation Agency (NIA), which has also registered a case in the Hiran matter, visited his residence to record the statement of his widow and others.

A senior NIA official related to the case probe told IANS: “A team of the agency has gone to the residence of Hiran to record the statement of his wife.”

The official said that the NIA will also record the statement of Hiran’s relatives and also try to collect more evidence in the case.

The Union Ministry of Home Affairs had issued a notification to the NIA to probe the death of Hiran.

The ATS also met Maharashtra Home Minister Anil Deshmukh and apprised him on the current status of the case investigations.

On Sunday, claiming a major breakthrough, the ATS arrested Shinde, 51, and Gor, 31, in connection with Hiran’s death.

Early on February 25, Hiran’s SUV with 20 gelatin sticks and a threat note was planted and abandoned near Antilia, the home of industrialist Mukesh Ambani.

Vaze was arrested on March 13 and is currently in the custody of NIA till March 25, for the twin crimes.

Shinde was dismissed from service after being convicted in the November 2006 Versova fake encounter case of Ramnarayan Gupta alias Lakhan Bhaiya, said to be a close aide of the jailed mafia don, Rajendra S.Nikhalje alias Chhota Rajan.

Sentenced to life imprisonment, he was out on parole since May 2020 when he came in contact with Vaze and reportedly helped out in his illegal activities.

Officials said that more than half a dozen people are currently under the scanner of the ATS for their role in Hiran’s death.

Banking services to be affected for nine days; here’re details