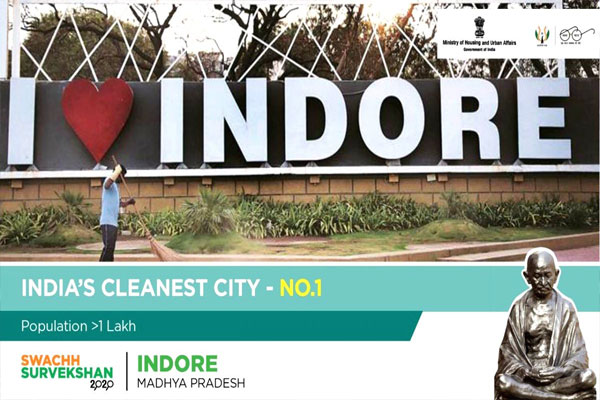 New Delhi: Indore city in Madhya Pradesh emerged as the cleanest city for the fourth time in a row in the category of more than one lakh population, the Ministry of Housing and Urban Development announced on Thursday.

The Swachh Survekshan awards were announced by Union Minister Hardeep Singh Puri. It monitors the performance of the Swachh Bharat Abhiyan, launched in 2014. The survey was conducted in 4,242 cities, 62 cantonment boards and 92 Ganga towns and was completed in 28 days.

Mysuru in Karnataka had won the award for the cleanest city in the first edition of the survey in 2016, while Indore had retained the top position for three consecutive years.

This year, Indore is followed by Surat city in Gujarat and Navi Mumbai in Maharashtra. Meanwhile, in the category of less than one lakh population, Karad, Saswad and Lonavala cities in Maharashtra emerged victorious.

Chhattisgarh ranked first in the category of best performing states with more than a hundred urban local bodies, while Jharkhand emerged first in the less than one hundred category.

Best city in terms of maximum citizen participation award in the category of the population of over one lakh has been given to Uttar Pradesh’s Shahjahanpur. In the same category for cities with a population less than one lakh, the award was bagged by Nandaprayag in Uttarakhand.

India’s cleanest cantonment was awarded to Jalandhar in Punjab and the best Ganga town was given to Varanasi, Prime Minister Narendra Modi’s constituency, in Uttar Pradesh.