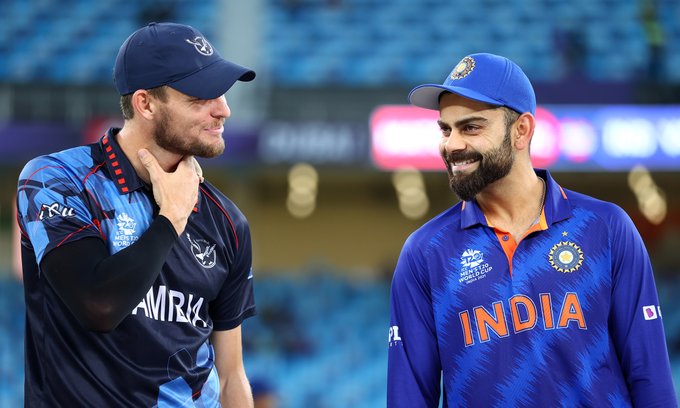 Dubai: Clinical half-centuries from Rohit Sharma (56 off 37 balls) and KL Rahul (54 not out off 36 balls) steered India to a nine-wicket win over Namibia in their final Super 12 match of the ICC Men’s T20 World Cup at the Dubai International Stadium here on Monday. After restricting Namibia to 132/8 in 20 overs, India chased down the target with 28 balls remaining.

India blasted 54 runs in the Power-play, 39 of those coming from Sharma’s bat. He had luck on his side, with his one-handed pull put down by Michale van Lingen at fine leg and rolled to the boundary rope for four in the opening over. That drop proved to be costly as Sharma took a four and six off David Wiese followed by another four off Rubel Trumpelmann. Rahul joined the party with a short-arm jab-pull off Wiese over deep mid-wicket in the fourth over.

Post Power-play, Sharma continued his strong show, taking two boundaries before reaching his second half-century of the tournament in the eighth over. Jan Frylinck broke the opening partnership at 86 as Sharma skied a cross-bat slog to keeper Zane Green. After Sharma’s dismissal, Rahul was at his elegant best with wristy flick and clean lofted boundaries.

Suryakumar Yadav, promoted to number three, creamed a flurry of boundaries, with a loft over extra cover and scoop over fine leg standing out as India inched closer to the target. Rahul reached his third half-century of the tournament with a single to long-on before finishing off the chase with a four through long-off.

Padma awards: Moments of glory for these Indians

Labh Panchami 2021 Date, Tithi, Puja Muhurat and all you need to know