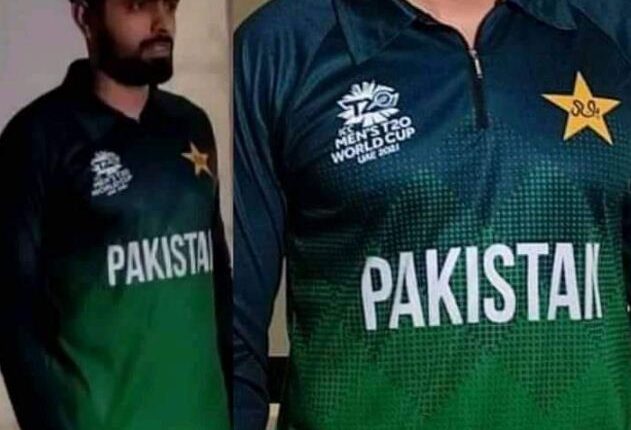 New Delhi: Ahead of the upcoming T20 World Cup, the Pakistan Cricket team has sparked a controversy by writing ‘T20 World Cup UAE 2021’ instead of ‘India 2021’ on their jersey for the mega event, in a leaked picture on social media.

A picture is doing the rounds on social media in which Pakistan captain Babar Azam can be seen sporting the kit for the tournament with UAE written on it as the host. “ICC Men’s T20 World Cup UAE 2021”, reads the top right of the jersey of the batsman.

The T20 World Cup was originally to be played in India, however, due to the existing Covid-19 situation in the country, it was shifted to UAE and Oman. But, BCCI is still the official host of the mega event and hence, all team jerseys should have ‘ICC Men’s T20 World Cup India 2021’ written on them, according to ICC rules.

The act by Pakistan is shocking and can irk both BCCI and ICC. However, Pakistan Cricket Board (PCB) has not unveiled the jersey officially, and it remains to be seen if they will go ahead with the same kit or not.

Many teams, who are playing the qualifying round of the World Cup, have already unveiled their jerseys with India mentioned as the hosts on their kits. Scotland and Netherlands jerseys can be seen with ‘India 2021’ written on them.

The Virat Kohli-led team India will play their opening game of the T20 World Cup against the arch-rivals Pakistan on October 24 in Dubai and controversy outside the pitch may heat up the clash.

Meanwhile, the Pakistan squad will hold a seven-day training and conditioning camp under bio-secure protocols at the National High-Performance Centre and LCCA ground, Lahore from Sunday. The squad will depart for Dubai on October 15.