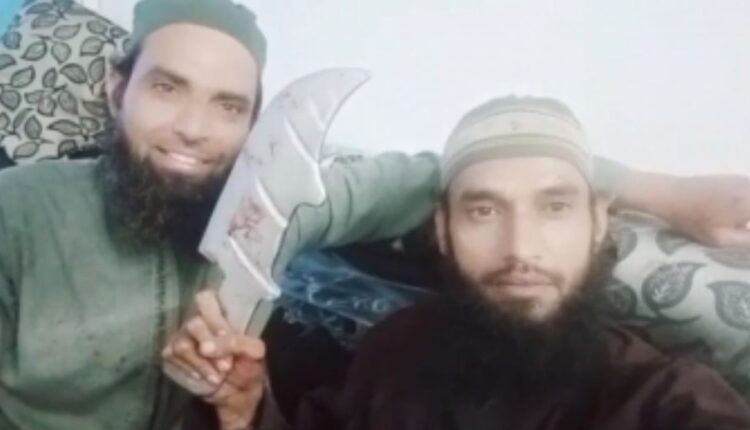 Udaipur: In a gruesome incident, a tailor was hacked to death in broad daylight inside his shop on a crowded street in Udaipur for supporting now-suspended BJP spokesperson Nupur Sharma on social media over her controversial remarks on Prophet Muhammed.

The attackers entered his shop and stabbed him multiple times with daggers and also slit his throat. A video of the incident where the accused have claimed responsibility for the murder has gone viral on social media.

The shops in Hathipol, Ghantaghar, Ashwani Bazar, Dehli Gate and Maldas Street in Udaipur have pulled down their shutters in protest against the incident.

The body of the victim was still lying outside the shop till the time of filing this report. The family members of the deceased have demanded Rs 50 lakh and a government job as compensation.

The victim has been identified as Kanhaiyalal Teli (40), a tailor who ran a shop by the name of Supreme Tailors in Dhanmandi.

At around 2.30 pm on Tuesday, the two miscreants entered his shop on the pretext of giving their measurements for cloth stitching.

By the time Kanhaiyalal could understand anything, the miscreants attacked him multiple times with daggers, resulting in his death.

Top police officers and an FSL team are on the spot collecting evidence.

“I condemn the heinous murder in Udaipur. Strict action will be taken against all those involved in the crime and the police will go to the bottom of the case. I appeal to all the parties to maintain peace. Strictest punishment will be given to those involved in such a heinous crime,” he said.

After the gruesome murder, leader of opposition in the Rajasthan Assembly, Gulabchand Kataria, called the SP and inquired about the incident.

Kanhaiyalal was a resident of Govardhan Vilas area. Ten days back, he had put up a social media post in favour of Nupur Sharma. Since then, people from a particular community were threatening to kill him.

Troubled by the constant threats, Kanhaiyalal did not even open his shop for six days besides filing a police complaint in this matter. The police asked him to remain careful for a few days.

Choudhary said that action will be taken against the culprits. Asked about the threats received by the victim, the SP said that all records related to the deceased are being investigated.

Mumbai building collapse toll mounts to 18; at least 14 others injured