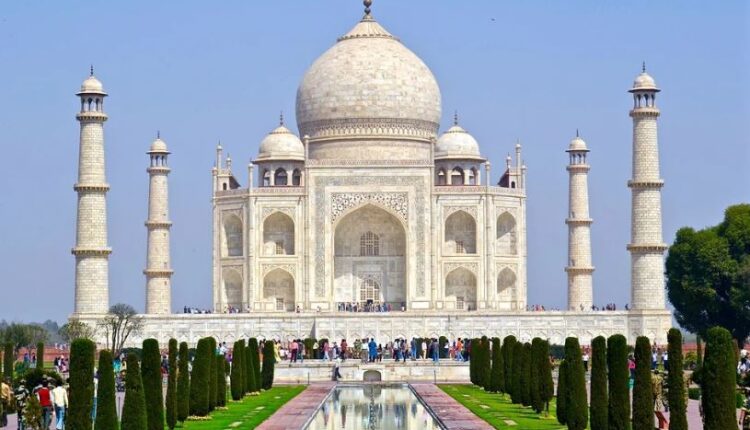 Agra: With the second spell of monsoon rains last week, the dry and polluted Yamuna river is again in full flow, adding visual delight to tourists’ experience at the rain-washed Taj Mahal and the Etmauddaula.

“Yamuna’s lost glory has been restored. The river has sprung back to life drawing thousands of cheering people to its banks,” said Devashish Bhattacharya of the River Connect Campaign.

Will there be a flood? How long this beautiful scene with the river flowing full to the brim will continue to inspire and fascinate us? These are the questions everyone is asking.

The rain washed Taj Mahal against a clear, blue skyline dazzles, as tourists, express awe and wonder. The Yamuna at the rear of the Taj Mahal has transformed the ambience as the lush green vegetation around the Mehtaab Bagh all the way to the Agra Fort and beyond is a delight to watch.

The controversial Taj Corridor is now a sprawling green buffer between the Taj and the Fort, both world heritage monuments. The picturesque skyline against a full flowing Yamuna is an experience that tourists shall never forget.

Pandit Jugal Kishor Kishore of the Sri Mathuradheesh temple along the river bank said, “From a sickly sewage canal, the Yamuna river stands as a vibrant and attractive water body which is the lifeline of the city. Heaps of garbage that had accumulated along the banks have disappeared. The banks are now cleaner and greener, thanks to the monsoon rains. The chirping birds are back and people stop by for a while to enjoy the spectacle of the Yamuna in its pristine glory.”

It is worth recalling that the Mughal emperor Shah Jahan built the Taj Mahal because of the Yamuna river, but in the past few decades, due to lack of fresh water and pollution by industries, the river has lost its charm and ancient glory. For most part of the year the Yamuna remains dry and polluted as upstream barrages from Hathini Kund to Wazirabad, Okhla and Gokul hold back all the water. The downstream cities suffer as a result.

Environmentalist Devashish Bhattacharya says there is an urgent need to ensure a minimum flow of water round the year so that the river remains alive and sustains the precious aqua life.

Over 500 years ago, it was the grandeur of the Yamuna that had attracted the founder of the Mughal dynasty to open shops in Agra. In later years, his descendants built some of the magnificent monuments like the Taj Mahal and the Etmaduddaula along its banks.

While the younger folk have generally stayed away from the stinking river which holds no charm for them, people of the older generations do occasionally venture out to conduct ritualistic pujas and baths. Unfortunately the dozen-odd ghats along the riverfront, which once was the centre of a thriving commercial activity and river culture, have disappeared without a trace, reducing the 20 km-long riverfront to a vast wasteland, Bhattacharya adds.

“We all know that all great civilizations in the world developed along river banks. The rivers have been sustaining life in its various manifestations and glory. The importance of rivers in India can be understood by one simple fact that almost all rivers are worshipped as goddesses,” green activist Padmini Iyer said.

Yamuna, the consort of Sri Krishna has played a significant role in shaping the history of India right from the days of the Mahabharat till today. An interesting fact about Yamuna is that it has a richer history and a valuable contribution to enriching culture, art, architecture and commerce, compared to river Ganga.

Starting in Uttarkashi district in the Himalayas from Yamunotri glacier, it enters Dehradun, flows close to Jagdhari and Yamuna Nagar in Himachal, separates Uttar Pradesh and Haryana, enters Saharanpur in Uttar Pradesh, touches Kurukshetra, Karnal,Sonipat, and the famous battleground of Panipat.

The epic Mahabharata was written on its bank, Saint Parasher and Satyawati gave birth to Ved Vyas, Raja Bharat and the father of Bhisma Shantanu organised great Yagnas, and for thousands of years great saints and thinkers lived in ashrams along the Yamuna banks.

Leaving Haryana and Uttar Pradesh, the river enters Delhi which for 2,000 years has been the seat of power and politics. The Mughals and later the British built dozens of monuments and forts. The river once again enters Haryana and three of its big industrial clusters, Ballabhgarh, Faridabad and Palwal depend on its water.

Once it enters Uttar Pradesh, the river’s profile changes as a whole mythology is woven around the Yamuna. Sri Krishna lore would be incomplete without the river. From Vrindavan to Bateshwar in Agra district, it is Sri Krishna and Radha and their leelas that sustain literature, culture, faith and philosophy.

Vallabhacharya, the blind bard of Braj Bhasha Soor Das, the mediaval Bhakti movement and the Meera tradition blossomed along the Yamuna banks. As the river leaves Mathura it enters the famous Renuka Dham. Renuka was the mother of lord Parshu Ram. A little distance away the river suddenly takes an eastern turn as it enters Agra, the capital of the Mughals. The river is now joined by half a dozen other smaller rivers like Parvati, Khari, Utangan, Gambhir. Beyond Agra rivers Betwa and Chambal merge into Yamuna which eventually joins Ganga in Prayagraj.

No other river in the world has a richer history, culture or religious significance and as the sister of Yamraj, the god of death, its star status in Indian mythological tradition is permanently etched.

Yamuna finds mention in Rig Veda, the founder of the Mughal dynasty Babar was lyrical about the quality of Yamuna water confirmed by medieval historians and foreign travellers. Both Abul Fazal and Lahauri have written extensively about the Yamuna water.

It was the Yamuna water that compelled Shah Jahan to build his dream monument the Taj Mahal along its bank. Pandit Jagannath, wrote the famous Ganga Lahri. But in praise of Yamuna he wrote the Amrit Lahri, such was the quality of its water.

But what of today? How do we describe Yamuna today? A sewage canal, a drain, a big gutter, a civilisational sink? From the life giving Amrit to death dispensing poison, has been the cruel tale of this river which even in its dying stages is sustaining the life of millions of people.