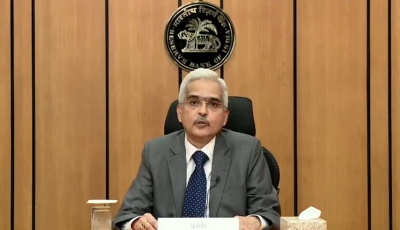 Chennai: Apart from the decision on the repo rate hike by the Reserve Bank of India’s (RBI) Monetary Policy Committee (MPC) at its upcoming meeting, one can also expect few more things post the discussions.

Economic experts expect the MPC to hike the repo rate by 25-35 basis points (bps) with industry lobby body ASSOCHAM also urging the central bank to do the same.

Further it will also be interesting to see whether there will be unanimity amongst the members of the MPC on the decisions taken at the ensuing meeting.

Post MPC meeting, the RBI Governor Shaktikanta Das is expected to share what the bank has written to the central government as to the reasons for not controlling the inflation and the steps that are being taken to reign in the same.

The MPC had met on November 3, to discuss what it would tell the central government on the reasons why it was not able to restrain the inflation.

The proceedings of the said MPC meeting have not been made public even though the law provides to the contrary.

As per section 45ZK, the RBI shall publish, after the conclusion of every meeting of MPC, the resolution adopted by the said Committee.

On the issue of unanimity amongst the MPC members, at the September MPC meeting, Dr. Ashima Goyal voted against the resolution to hike the repo rate by 50 basis points to 5.90 per cent.

Goyal was for a hike of 35 basis points and explaining his reasons voted against the resolution.

However, the resolution was passed by a 5:1 majority.

In India, the retail inflation rose to 7.41 per cent in September.

At the same meeting, another member Prof. Jayanth R. Varma voted against the second part of the resolution on the withdrawal of accommodation to ensure inflation remains within the target.

Varma said the MPC should now pause rather than focus on further tightening.

On the issue of upward rate revision, he was for upward revision by 60 basis points instead of 50 basis points that was proposed.

As the difference between the two was only marginal Varma voted in favour.

Be that as it may, the expectation of the MPC meeting is that the repo rate hike will be a moderate one and range between 25-35 bps.

The RBI has hiked the repo rate by 190 bps from four per cent to 5.90 per cent. Now MPC will take into account the gross domestic product (GDP) growth estimates, the foodgrain production estimates, inflation projection, global economic activity and other factors.

“The RBI will be presenting the monetary policy against the backdro p of GDP growth slowing down as well as inflation being high above six per cent,” Madan Sabnavis, Chief Economist, Bank of Baroda said.

According to him, the MPC will continue with rate hikes this time though the magnitude will be lower – probably 25-35 bps,

“More specifically we do believe that the terminal repo rate for th e financial year will be 6.5 per cent, which means there will be one more rate hike in February. It is unlikely to change the stance and the withdrawal of liquidity will continue,” he added.

“We expect a 35 bps rate hike in the upcoming meeting. The Consumer Price Index (CPI) inflation is likely to moderate further in the coming months and slip below six per cent by the end of the fiscal year,” Rajani Sinha, Chief Economist, CARE Ratings told IANS.

She also said the Wholesale Price Index (WPI) has also fallen sharply from 16 per cent in May/June to around eight per cent.

“The fall in global commodity prices comes as a big relief. However, the concern is that core inflation in India still remains high above six per cent. Food inflation and specifically cereal inflation is also high,” Sinha pointed out.

This, in turn, will put upward pressure on household inflationary expectations which is already at a high of around 10 per cent. Hence, while there is some reprieve on the inflation front, RBI would remain vigilant, she added.

Moreover, external demand is weakening as the global economy slows down, Sinha said.

According to K. Joseph Thomas, Head Research, Emkay Wealth, as far as interest rates go, the trajectory of domestic inflation is of prime importance.

“The pressure seems to be easing on the price level, but the comfor t that can be drawn from fuel prices is far from real. The upside risks in fuel prices continue to be a concern,” he said.