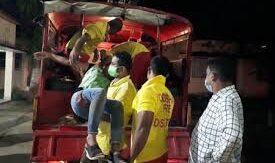 Bhubaneswar: The Board of Odisha Joint Entrance Examination (OJEE) today informed that alternative arrangements will be made for aspirants, who met with a road mishap near Taptapani in Ganjam district last evening.

“Separate arrangements will be made to ensure that the students injured in last evening’s bus accident appear the entrance exam,” said an official.

While as many as 60 OJEE aspirants from Gajapati district were en-route to Khordha for appearing the exam today, 20 of them sustained injures after the ill-fated bus turned turtle. While negotiating a curve near Palukhola, the bus driver lost control and the vehicle overturned.

With the help of locals, the injured were admitted to a hospital at Digapahandi. After receiving information, Fire Service personnel reached the spot for a rescue operation.