Top industrialist Cyrus P. Mistry, head of the Shapoorji Pallonji Group and former Tata Sons Chairman, was killed in a road accident at Palghar in northern Maharashtra on Sunday afternoon. He was 54.

Mumbai: Top industrialist Cyrus P. Mistry, head of the Shapoorji Pallonji Group and former Tata Sons Chairman, was killed in a road accident at Palghar in northern Maharashtra on Sunday afternoon. He was 54.

The accident came after his vehicle, with at least 3 others travelling with him, crashed into a road divider.

Mistry’s death comes barely two months after his father, Pallonji Mistry, passed away on June 28 in Mumbai at the age of 93.

According to police officials, Mistry was travelling from Ahmedabad to Mumbai when his car hit a road divider on River Surya near Charoti. 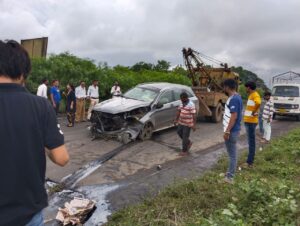 There were four people in the car out of which two, including Mistry, succumbed instantly to injuries in the road crash which left the vehicle badly damaged.

The other two injured, whose identity was not clear, have been admitted to a local hospital in Kasa.

The exact causes of the accident are not clear though it is suspected that over-speeding may have led to the crash and the entire region (Palghar) has been battered with heavy rains since Saturday.

The news sent shockwaves in Indian corporate and political circles and many reacted with initial disbelief.

Chief Minister Eknath Shinde expressed shock at the tragedy and said Mistry’s demise is a loss not only to his family but also the country’s industrial world.

“Rest in Peace Cyrus,” she said in a tweet.