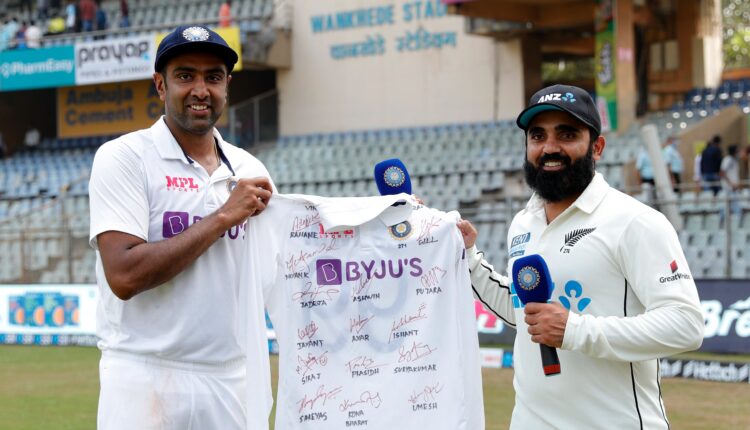 Mumbai: New Zealand spinner Ajaz Patel, who took all 10 India wickets in the first innings of the second Test at the Wankhede Stadium here, was in for a surprise when the Mumbai-born player was presented a jersey signed by the entire India squad for his achievement, at the conclusion of the match on Monday.

The Board of Control for Cricket in India (BCCI) posted images on social media showing India spinner Ravichandran Ashwin presenting the jersey to Patel, who became only the third player in Test cricket history to take all 10 wickets in an innings after Englishman Jim Laker and India’s Anil Kumble.

Stay tuned for this folks ⌛

Patel, whose family moved to New Zealand from Mumbai when he was eight-years-old, finished with figures of 10/119 in 47.5 overs. Patel’s historic performance and overall match haul of 14 wickets was not enough to help New Zealand avoid a 372-run loss and lose the series 1-0.

Ashwin was effusive in his praise for the left-arm spinner, saying that destiny also played its part in his achievement.

“Before I get to what I did, it was a wonderful performance by Ajaz. It doesn’t spin all the time in Wankhede, and he used the seam and put the ball in the right places, and there was a bit of destiny involved in his 10-for too,” said Ashwin in the post-match presentation ceremony.

Omicron: 40% travellers, who came from ‘at-risk’ countries, untraceable in Odisha