Ten-member delegation from Odisha participates at Hindu Adhiveshan in Goa 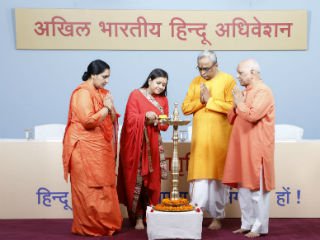 Panaji: The sixth Hindu Adhiveshan, hosting over 150 Hindu organisations from India and abroad was inaugurated today at Ramnathi in Ponda. Being held under the auspices of the Hindu Janajagruti Samiti, the four-day conclave will lay the roadmap for the establishment of the Hindu Rashtra.

A ten member delegation from Odisha, led by Murali Manohar Sharma, National Convener of the Bharat Raksha Manch, is attending the conclave. Speaking at the inaugural ceremony, Sharma said that “We have never genuinely practiced secularism in this country, only minority-ism. The time has come for the banishment of appeasement politics.”

The delegation will speak on the problems of Bangladeshi Infiltration, the rising incidences of terrorism and riots, cow smuggling, missionary activities and conversions and Islamic sleeper cells, interference in the matters of temples and mutts in Odisha. The recent affairs and mismanagement of the Jagganath Temple in Puri, and the matters pertaining to the Shankarcharya of Gobardhan Peeth will also be discussed.