Tension escalates as thousands fight to get on trains leaving Kyiv 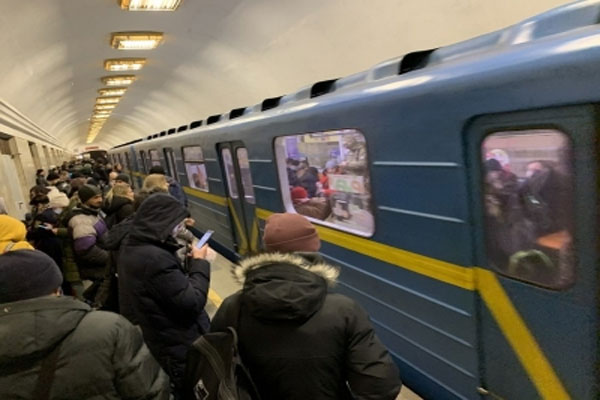 New Delhi: A video has shown people’s desperate bid to flee Kyiv overnight as explosions struck residential areas and as many as 15,000 troops — an entire Russian army division — bore down on Ukraine’s capital, Daily Mail reported.Footage from Kyiv station showed hundreds of civilians, some with young children, trying to cram onto an already packed train amid fears that the city could soon be turned into a war zone, the report said.Airstrikes rocked residential suburbs of the capital on Tuesday night as a 40-mile long convoy of Russian military vehicles inched closer, with fears that President Vladimir Putin’s troops will soon lay siege to the city.Another convoy was reported to be moving towards Kyiv from the south-east, with plans to encircle it, Daily Mail reported.On Tuesday afternoon, outrage followed an eruption of explosions around the capital’s 1,300ft TV tower, built by a ravine where as many as 1,50,000 people were killed by the Nazis — including 34,000 Jews in two horrific days in 1941 — during Adolf Hitler’s campaign against the Soviet Union.Five people, reportedly a single family walking together, were burned alive in the blasts.After the attack, Volodymyr Zelensky tweeted: ‘To the world: what is the point of saying ‘never again’ for 80 years, if the world stays silent when a bomb drops on the same site of Babyn Yar? At least 5 killed. History repeating…’Russia also shelled the country’s second-largest city Kharkiv, killing at least 11 people and wounding dozens of others, Ukrainian officials said, Daily Mail reported.