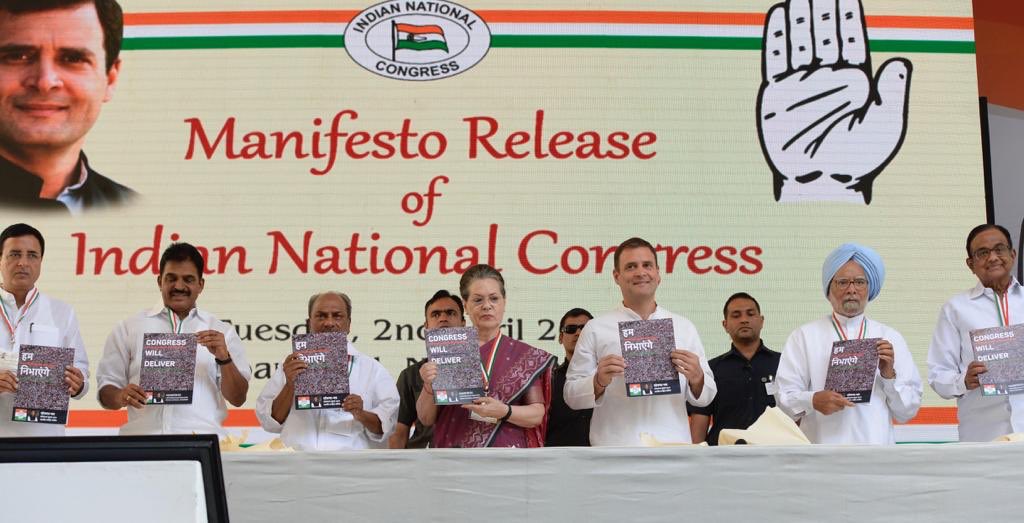 1. Nyay: (Nyuntam Aay Yojana) to be introduced to ensure a life of dignity to all Indians. Rs 72,000 per year will be transferred to the poorest 20 per cent households in India, preferably to the woman in the household.

2. Jobs: Will be number one priority in public and private sector. Ensure 34 lakh jobs in the public sector by filling all 4 lakh central government vacancies before March 2020. Persuade state governments to fill their 20 lakh vacancies.

Fillip to private sector jobs by rewarding businesses for job creation and employing more women. Businesses with over 100 employees to implement apprenticeship programme.

4. Universal Healthcare: Enact Right to Healthcare Act and guarantee every citizen free diagnostics, out-patient care, free medicines and hospitalisation, through a network of public hospitals and enlisted private hospitals. Double expenditure on healthcare to 3 per cent of GDP by 2023-24.

5. GST 2.0: Radically simplify the GST regime with a single moderate rate of tax, zero rating of exports and exemption for essential goods and services. Provide panchayats and municipalities a share of GST revenues.

6. Armed Forces and Paramilitary Forces: Reverse the trend of declining defence spending under the NDA government and increase it to meet the requirements of armed forces. Expedite all modernisation programmes of the armed forces in a transparent manner.

7. Quality Education For Every Child: School education from Class I to Class XII in public schools shall be compulsory and free. Focus on learning outcomes. Schools will have adequate infrastructure and qualified teachers. Allocation for education to go to 6 per cent of GDP by 2023-24.

8. Gender Justice: Pass Women’s reservation bill reserving 33 percent of seats for women in the Lok Sabha and state assemblies in the first session of the 17th Lok Sabha. Reserve 33 percent of all posts/vacancies in central government for women.

12. Celebrating Freedom: Protect freedoms including the freedom to dissent. Bring law on privacy, restrict use of Aadhaar to the original purposes, protect the rights of every citizen especially students, journalists, academics, artists, civil society activists and NGOs.

Review all laws and repeal those that are outdated, unjust or unreasonably restrict the freedom of the people.

13. Protecting Institutions: To revitalise the institutions that “were brazenly undermined in the last five years” such as RBI, ECI, CIC, CBI, etc. Restore “their dignity, authority and autonomy” while making them accountable to Parliament. Abolish opaque electoral bonds introduced by the NDA government. Set up a national election fund that will be allocated at the time of elections to recognised political parties.

14. Cities and Urban Governance: Comprehensive policy on urbanisation to address issues concerning towns and cities, including city governance, livelihoods, housing, habitat, pollution, climate change, urban transport and disaster management. For the urban poor, Right to Housing and protection from arbitrary eviction, and a Slum Upgradation and Transformation Scheme. Introduce a new model of governance for towns and cities through directly elected mayors. Transform cities into engines of economic growth.

Odisha MLA threatens mass immolation over problems in his…