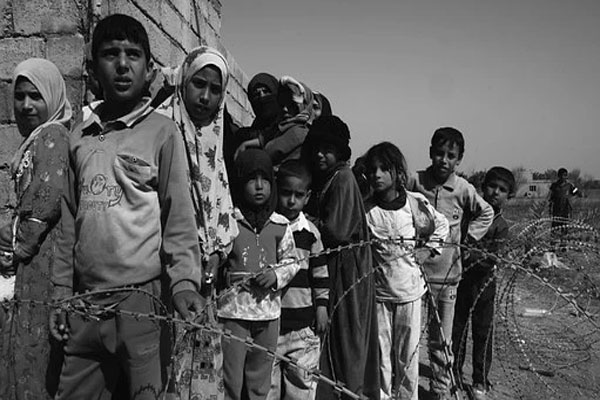 The ILO Declaration of Philadelphia, 1944 states “Poverty anywhere is a threat to prosperity everywhere.” Poverty, therefore, has implications for global stability which has been well appreciated by the policymakers the world over. But poverty persists since the benefits of growth have not been percolated to the masses leading to the unequal distribution of wealth. This has led to the concentration of wealth in a few hands and the impoverishment masses.

Poverty measurement and analysis has been a key aspect of the World Bank’s mission for years, as is our work to share knowledge and methods for how to measure poverty more accurately and more frequently. But IMF does not measure poverty. The poverty line should be determined based on such criteria that one’s income will allow him/her to have access to basic necessities and can lead a decent life.

However, in order to camouflage their failures in curbing poverty, ruling classes adopt such a low yardstick/benchmark to determine the poverty line by which many people will find to have lived above the poverty line though they might be leading a wretched life. In other words, if you, like a ruler or institution, fail to reduce poverty, then prepare a benchmark in such a way that automatically, more people will find themselves out of the quagmire of poverty despite struggling to eke out a basic existence.

Extreme poverty, deep poverty, abject poverty, absolute poverty, destitution, or penury, is the most severe type of poverty, defined by the United Nations (UN) as “a condition characterized by severe deprivation of basic human needs, including food, safe drinking water, sanitation facilities, health, shelter, education, and information. It depends not only on income but also on access to services” (UN 1995 report of the World Summit for Social Development). Historically, other definitions have been proposed within the United Nations.

What is a matter of hot debate and controversy is that using the World Bank’s $1.90 per day line in purchasing-power-parity terms, two recent working papers (in April 2022)  published by the Bretton Woods organizations — the World Bank and the International Monetary Fund have come out with extreme poverty ratio in India. Though differing in the magnitude of the reduction, both the papers agree that extreme poverty levels ($1.9 purchasing power parity line) in India have fallen from where they were in 2011-12. They also say that consumption inequality has declined. The study comes at a time when several recent global reports have pointed to the widening gap between the rich and poor in Asia’s third-largest economy.

But both the papers differ on the magnitude of poverty simply because of the different yardsticks used for calculating poverty. The IMF paper titled Pandemic, Poverty, and Inequality: Evidence from India published on 5 April 2022, found that in India, the number of people living in extreme poverty — defined by the World Bank as living on US$ 1.9 or less in purchasing power parity (PPP) terms — was 0.8 percent of the population in the pre-pandemic year 2019.

The World Bank working paper, titled “Poverty in India Has Declined Over The Last Decade But Not As Much As Previously Thought”, finds that extreme poverty fell by 12.3 percentage points to 10.2 percent in 2019, down from 22.5 percent in 2011 with greater poverty reductions in rural areas.

The poverty level in rural and urban areas declined by 14.7 and 7.9 percentage points, respectively, during the 2011-2019 period. While it eased to 11.6 percent in rural areas in 2019, the urban poverty level stood at 6.3 percent. Urban poverty rose by 2 percentage points during the 2016 demonetization, and rural poverty reduction stalled by 2019 when the economy slowed). The consumption inequality in India has moderated since 2011.

But this IMF paper was written by Surjit Bhalla; Karan Bhasin; Arvind Virmani. While Surjit S Bhalla happens to be International Monetary Fund Executive Director for India, Bangladesh, Sri Lanka, and Bhutan, Arvind Virmani is the former chief economic adviser to the Government of India. Karan Bhasin is a New York-based researcher. So, the IMF paper is authored by officials of India who are supposed to write to appease the Indian government by showing a massive reduction in poverty.

That is why the IMF paper has stated that such back-to-back low poverty rates suggest India has eliminated extreme poverty. Consumption inequality in India for each of the years 2004-05 through the pandemic year 2020-21 has declined. Real (inflation-adjusted) inequality, as measured by the Gini coefficient, which stands at 0.294, is now very close to its lowest level of 0.284 observed in 1993-94.

It has also praised the Pradhan Mantri Garib Kalyan Anna Yojana for keeping extreme poverty levels in check during the pandemic. It said that India’s food subsidy program/food handouts curbed poverty by acting like “cash transfers” and absorbed a major part of the pandemic shock. This was instantly lauded by select politicians and media personalities on Twitter. However, National Food Security Act was enacted during the UPA regime.

However, both views are of the author(s) and do not necessarily represent the views of the respective organization. So, officially not acceptable.

All international poverty lines are measured in terms of purchasing power parity, not the exchange rate. The extreme poverty line decided by the World Bank is $1.9 PPP in a day in 2015 based on 2011 prices. PPP is a metric that equalizes the buying power of different currencies to make comparisons easy.

On World Bank’s website, it is found that the World Bank Group’s mission is to end extreme poverty and promote shared prosperity. In order to monitor progress and understand the types of poverty reduction strategies that could work, it is important to measure poverty regularly.

In India, poverty is estimated based on the Consumption Expenditure Survey (CES) of NSSO. Since 2011, India has not released a new household consumption survey. There are no official poverty numbers after 2011 in India. Leaked data from the National Sample Survey (2017-18) showed a startling 3.7 percent decline in real consumption over six years, and the survey was never released as it would have shown a rise in poverty.

The last expenditure survey released by India’s National Sample Survey organization/office dates back to 2011, which is when India last released official estimates of poverty and inequality.

The IMF paper is based on data on Private Final Consumption Expenditure from the National Accounts Statistics. But reliance on national accounts only kicks the ball into even more fraught and politicized territory. Its transparency was questioned even by Aravind Subramaniam, former chief economic advisor. What is questionable is that the IMF study took into account the cash equivalent of Public Distribution System transfers and added those to household consumption. This is quite arbitrary.

The World Bank paper has used data from the Consumer Pyramid Household Survey (CPHS) run by the Centre for Monitoring the Indian Economy (CMIE). But the CPHS started only in 2014, its sample appears to undercount poor households.

According to World Bank, the COVID-19 pandemic reversed progress in global poverty reduction for the first time in a generation in 2020. Its lingering effects, combined with rising inflation and the effects of the war in Ukraine, will lead between 7.5 crore and 9.5 crore additional people to live in extreme poverty in 2022 compared to pre-COVID-19 projections. So obviously India would have seen more people being dragged below the poverty line. But both IMF and World Bank papers do not talk about the increase in poverty during the pandemic period deliberately.

One of the main reasons for the vast difference in poverty estimates is the difference in the methodology of each paper. From 1999-to 2000 onwards, the NSSO switched to an MRP method which measures consumption of five low-frequency items (clothing, footwear, durables, education, and institutional health expenditure) over the previous year, and all other items over the previous 30 days. The Uniform Reference Period method involves asking people about their consumption expenditure across a 30-day recall period.

The latest method used by the International Monetary Fund paper is the Modified Mixed Reference Period method which involves collecting a seven-day recall instead of a 30-day recall of certain perishable items. The proportion of the population below the $1.9 a day line was 22 per cent as per National Sample Survey Organisation’s uniform recall period consumption numbers.

According to Amit Basole, Head, Centre for Sustainable Employment, Azim Premji University, there are two main ways to find that: use a private source for household survey data or use the growth rate of Private Final Consumption Expenditure from the National Accounts Statistics to update the 2011-’12 National Sample Survey Organisation numbers. “The World Bank paper does the first by using data from the Centre for Monitoring Indian Economy, while Bhalla et al [International Monetary Fund paper] does the second”.

However, the reduction of poverty is not corroborated by other indexes. The finding that consumption inequality has declined sounds ridiculous as papers don’t unravel the rampant economic -wealth, income- inequality as revealed by the world Inequality report, Oxfam’s Inequality report. If poverty is so low, and inequality is declining, what was necessary to provide a free food scheme?

According to Oxfam India, based on the ‘Inequality Kills Report: while 4.6 crore Indians are estimated to have fallen into extreme poverty in 2020, accounting for nearly half of the global ‘new poor’ according to the United Nations, the number of Indian billionaires grew from 102 to 143 during the pandemic period.

The collective wealth of India’s 100 richest people hit a record high of Rs 57.3 lakh crore ($775 billion) in 2021. A report by Azim Premji University reveals: that as the pandemic and eventual lockdowns wreaked havoc on the economy and livelihoods, around 23 crores of Indians have been pushed into poverty during the past year.

The multidimensional poverty index used by the NITI Aayog in a recent report speaks just the opposite? By using methodology developed by Oxford Poverty and Human Development Initiative and UNDP, the 2021 NITI Aayog report highlights the quality-of-life indices such as standard of living, health, and education instead of income, that 25.01 percent of the population is multidimensionally poor. The country ranked 62nd out of 109 nations on the index. This index was based on 10 indicators such as lack of improved drinking water, adequate nutrition, or at least six years of schooling.

According to CMIE ‘s report, 12.2 crores people lost jobs in the 1st wave of the pandemic and 1 crore in the 2nd wave of the pandemic, while 97 percent of households’ income declined. Though there was an improvement, it still has not fully recovered as RBI has pointed out that it will take 12 years for the Indian economy to reach the pre-Covid stage. There is a recovery in the organized sector but not much in the informal sector. Indian economy is in such dire straits that more than half of the workforce of 90 crore Indians are not looking for jobs.

In terms of population, taking into consideration the additional statistical uncertainty, it is estimated that between 72 crore and 81.1 crore people in the world faced hunger in 2020. In 2019, around 19.44 crore faced hunger in India. This must have increased further in 2020 and 2021 in India.

The World Bank now reports on two higher-value poverty lines: $3.20 and $5.50 per day. These lines, which are typical of standards among lower- and upper-middle-income countries, respectively, are designed to complement, not replace, the $1.90 international poverty line. Economists stressed the fact that it is better for India to use $3.2 as the poverty line.