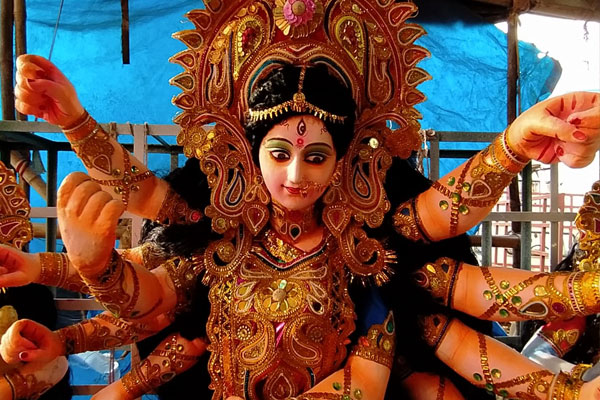 “This is the only trade I know; I have mastered it from generations. I have gone through hard times before too, but never did I dream that one day people will not be allowed to celebrate festivals. This year I am not even thinking of income, just managing to alive will be enough,” lamented Dholo Behera, a well-known artisan of the Old Town of Bhubaneswar.

The COVID-19 pandemic has dampened the spirit of Durga Puja this year. The confusing SOP’s and guidelines issued by the authorities and the courts have made matters worse. The few orders that the idol makers got were for smaller idols. The Puja Committees had slashed their budgets, donations were scarce. Prafulla Swain, organiser of the Puja Pandal at the Dak Bangla Chhak says that the government’s directives restricting the height of all idols this year, and the directive to avoid soliciting donations from devotees unless it is voluntary has hit them hard.

His small workshop is strewn with idols of Ganesha, Khudurukuni and Vishwakarma which he had made for the earlier festivals. Customers just did not come and the idols still stand in his shed. Many Durga idols had already been sculpted. Only the paint jobs remained. The unfinished handiwork, straw figurines on bamboo skeletons, can be seen piled up in the corners.  Even the small idols which were sold during Diwali have no demand this year. A few of the idol makers also made the Ravana images which were set alight during the Dusshera, but the authorities have even put a stop to this. 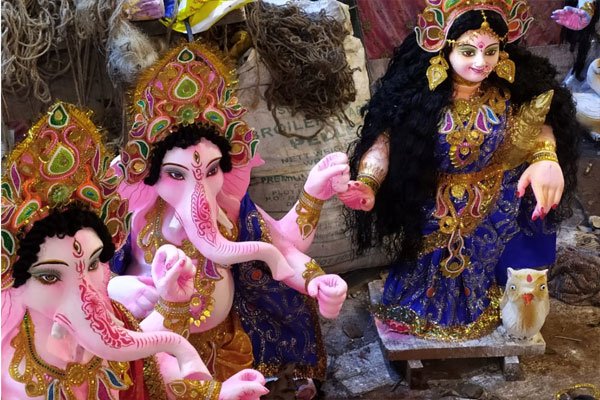 Any assistance from the government is far from their reach. Idol makers, whose fine craftsmanship has been the highlight of all religious festivities for centuries, suffer in silence for their daily bread. Many of them have started looking for alternative sources of income, some even by selling vegetables. Earlier this year,  the Central Pollution Control Board had banned the use of plastic, thermocol, and Plaster of Paris in making idols of gods and goddesses for their safe and eco-friendly immersion. In a gesture of relief, the Centre stayed the ban on POP Ganesh idols for a year. This is too little too late. “I wish I had not trained my children in our traditional occupation, they could have picked something else. Corona  has stolen away our  future and  our identity”, says  Behera.