The man with a magic brush: Bijaya Biswal 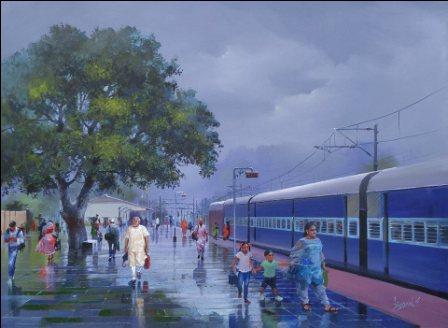 His paintings mesmerize. Your eyes want to believe that what you are admiring are actually paintings and not realities. It takes a while for the senses to settle down after the soul stirring emotions that one experiences after going through the enigmatic paintings by Bijaya Biswal.

A very humble person, Bijaya hails from Pallahara in the Angul district of Odisha. He has taken Odisha to an international level with his ‘Wet Platforms’ series of paintings and has become the blue – eyed boy for each and every art lover. Recently he was mentioned and praised by none other than Prime Minister Narendra Modi in his MANN KI BAAT for the ‘Wet Platforms’ series which has gone viral.

Bijaya Biswal, who is Chief Ticket Inspector (CTI) by profession in the Nagpur division of the Indian Railways, feels that his job is a God gift as he gets ample opportunities to travel and meet many people. In his wildest of dreams he had never thought that one day he would become an artist of international stature. According to him, he was born in this world just to be an artist.

At the age of five his tender fingers started to draw with charcoal from his mother’s chullah. Stolen chalk pieces from the classroom were his treasure trove of art tools and the walls inside his home was the canvas. His bliss knew no bound when he got his first set of colour pencils and sketch pens. His father had a medicine store and the empty off- white medicine cartons again became his canvas to paint posters of the then Bollywood superstars like Dharmendra ,  Amitabh Bachan, Rekha, Hema Malini, Mithun etc. At the age of 18 he was introduced to the water colour and there was no looking back as he graduated from water colours to acrylics, cartoons etc.

After completing post -graduation in Political Science from Utkal University he applied for the Indian Railways and was successful in getting a job. Becoming a railway man added extra bonus for him as an artist because it gave him ample opportunities to observe activities of the railway station. His love for a rain drenched station made him paint the ‘Wet platform,’series which became iconic. They are the most viewed paintings in the social network. When he gets an idea to paint his inner creativity drives him to the point where he starts from sketching basic shapes while the crescendo builds up to a climax till the painting is completed. During that time he is cocooned in a world of colours, shapes, textures and lives his dream like Van Gogh had said “I dream my paintings, and then I paint my dreams.” He has attended many art camps, exhibitions, workshops and symposiums both in the country and abroad.

Renaissance artists Michael Angelo and Da Vinci have been major impacts on his style of painting and back home Raja Ravi Verma and the legendary R.K.Laxman have inspired. He has great admiration for Indian artists Vasudeo Kamat, Prafull Sawant, Samir Mondal etc. Bijaya has a restless heart within him and his eyes always seek new subjects; it can be a simple chullah with smoke billowing out or a lush green forest with verdant green and yellow ochre to sooth the aching eyes.

His style is more conventional in nature and he works mostly in acrylics and water colour. In the acrylic medium he can apply eight layers of paint in a single day on a painting .The layers dry fast giving him the desired texture and bring out the rich and vibrant look. Water colour is an entirely opposite technique and he does it in one wash and keeps a minimal palette. He does not like painting in oil as it takes a lot of time to dry.

When he was a kid he used to sit under a banyan tree which had huge entwined roots. In his paintings he uses the roots as a base to many themes. His famous Ganesha entwined in roots has been a huge hit.

According to him the best creation is yet to happen and he is waiting for it.