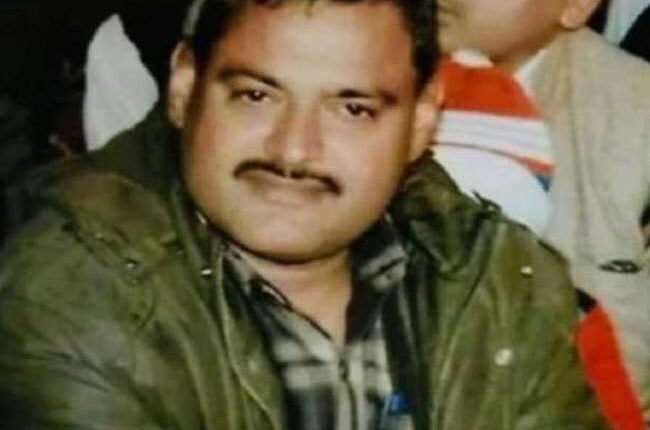 Kanpur: Gangster Vikas Dubey, who met with a gory end in an encounter with the UP STF near here on Friday, conjured the image of a typical don who dabbled in real-estate, won a district-level election and rubbed shoulders with political figures.

Last Friday, Dubey, who was around 50-years-old, hogged the headlines after his henchmen allegedly shot dead eight police personnel in a botched raid that he had converted into an ambush.

An old photo on social media showed him at an event next to an Uttar Pradesh minister, who switched parties to join the ruling BJP.

Another picture showed a poster of him appealing for votes for his wife, Richa Dubey, in a Zila panchayat election which she won from Ghimau under which Bikru village falls.

The poster also carried pictures of two leaders now in the opposition, implying that she had their support.

In 2000, Dubey himself won the Shivrajpur seat in a Zila panchayat poll he fought from prison, where he was lodged after a murder charge, according to officials.

However, following his arrest on Thursday, Dubey’s mother Sarla Devi said, “At this time, he is not in the BJP, he is with the SP.”

But, a Samajwadi Party spokesman said Dubey was “not a member of the party” and strict action should be taken against him.  Moreover, his call record details should be made public as demanded by party president Akhilesh Yadav to expose his links, he said.

After being on the run for nearly a week, during which he was said to have taken refuge in a hotel in Faridabad on Delhi’s outskirts, Dubey was picked up from the holy city of Ujjain in Madhya Pradesh on Thursday.

MP Home Minister Narottam Mishra said on Thursday, “Dubey arrived at the (Mahakal) temple in his car. A police constable identified him first, after which three others (security personnel) were alerted and he was taken aside for questioning and later arrested.”

However, temple sources gave a slightly different account. They said Dubey reached the temple gate in the morning and purchased a Rs 250 ticket from a counter near the police post. When he went to a nearby shop to buy prasad for the deity, the shop owner identified him and alerted police, they added.

When policemen asked him his name, he loudly said, “I am Vikas Dubey of Kanpur”, following which the cops and private security personnel deployed at the temple nabbed him.

The MP police then handed him over to the UP police. When he was being brought to the state, the police vehicle carrying him from Ujjain overturned at Bhauti area in Kanpur on Friday morning, police claimed.

Inspector-General of Police (Kanpur) Mohit Agarwal said Dubey tried to flee from the spot after snatching the pistol of an inspector leading to an encounter.

“Dubey was injured in the encounter and he was declared dead in the hospital,” ADG Kanpur range, JN Singh said.

Dubey shot into limelight last Friday when his henchmen ambushed UP policemen who had gone to Bikru village to arrest him in a new case of attempted murder.

Officials said the road was blocked by heavy earthmoving equipment and when policemen stepped out of their vehicles, they faced a hail of bullets, and eight of them were killed.

Since then, the UP police have shot dead five of Dubey’s alleged accomplices.

Police claimed that Dubey was involved in about 60 cases. But details obtained from officials indicate that he was not convicted even in cases like murder.

He was the prime accused in the murder of BJP leader Santosh Shukla inside the Shivli police station here in 2001, according to an official.

“Dubey had instilled so much fear in everyone that even after being accused of murdering a BJP leader having the status of minister of state, not even a single police officer gave a statement against him,” alleged the official who did not want to be named.

“No evidence was put before the court and he was acquitted for lack of evidence,” the official said.

He claimed that Dubey used to plot and execute crimes, including murder, from inside the jail.

His clout among police can be gauged from the fact that all the 68 police personnel at Chaubeypur police station near Kanpur were shunted to the reserve police lines on Tuesday with the top brass saying they suspected their integrity after last week’s ambush.

Even DIG Anant Deo, who till recently was the senior SP in Kanpur, was transferred from the state’s Special task Force (STF) to the Provincial Armed Police (PAC) unit in Moradabad.

Dubey was also an accused in the murder of Sidheshwar Pandey, a manager at Tarachand Inter College in Kanpur, in 2000.

He was accused of plotting the murder of one Ram Babu Yadav from the prison in the same year.

His name came up in the murder of Dinesh Dubey, a businessman, in 2004. He allegedly committed another murder in 2013.  He was accused of ordering the killing of his cousin Anurag in 2018, while he was himself in jail.

The victim’s wife had filed an FIR against four people, including him, according to his history sheet shared by officials.

A villager said Dubey and his brother Deepu Dubey dealt in real estate. Another younger brother Avinash was killed some time back, the local resident claimed.