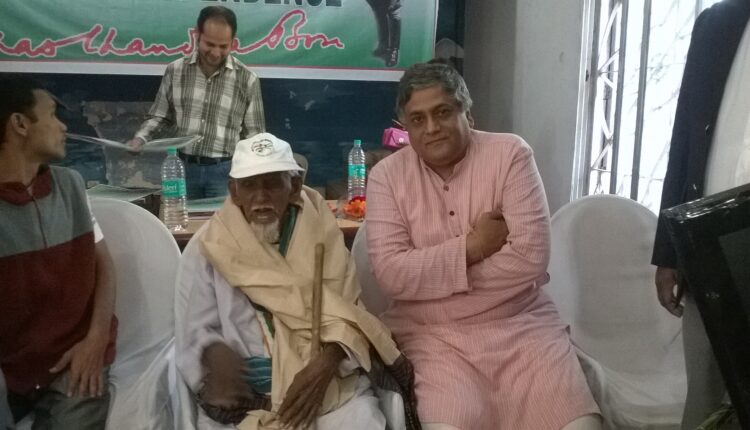 Bhubaneswar: “Qadam qadam badhāye ja, khushi ke geet gaye ja, ye zindagi hai qaum ki, tu qaum pe lutaye ja…”: a war cry that fueled a wave of rebellion among a battalion of 43,000 soldiers of the Indian National Army (Azad Hind Fauj) against British rule.  The fallen sons of the soil and the sacrifices they had made under the leadership of Netaji Subhas Chandra Bose,  the history of Indian Independence has preserved it all. But there is a torn page about the unsung heroes from Odisha in Netaji’s Azad Hind Fauj.

Researcher Anil Dhir who has interviewed around 27 former Odisha soldiers from the Azad Hind Fauj narrated that the Fauj consisted of Odia soldiers as well, a majority of whom hailed from Ganjam and Puri districts.  They had served in the Indian National Army (INA) under three categories namely ‘Black, ‘White’ and ‘Grey’. In 1948, a detailed list of the Odia soldiers was prepared by the INA Association of Odisha in its headquarters at Hinjlikatu.

During the Second World War, the British forces had detained 1100 civilians in Burma and sent them to Rangoon’s Central Jail suspecting they had INA links. At least 55 of the detainees were Odias. The battlefield claimed many other Odia sons and the ones who made it through the war, returned to Odisha only to spend the rest of their lives behind shadows.

The battle for Independence that these veterans had fought in the Netaji’s Army brought them neither laurels nor ensured better lives post independence. Following the Centre’s instructions, a Special Intelligence Wing formed by the Odisha Government kept the INA veterans under surveillance from 1948 to an unspecified period, depriving them of rehabilitation and resettlement privileges, said Dhir.

Moreover, irrespective of their military track records, no Odia INA veteran was selected for the Odisha Military Police that was formed in 1946.  Even the Gurkha’s were inducted in 1948, and later the surrendered Chambal dacoits but things never improved for the Odia soldiers of the INA.

Anil Dhir who has interviewed as many as 170 INA veterans all over the country, opined that after the  1970s, all other states especially Punjab, Kerala, Tamil Nadu, Uttar Pradesh, Himachal Pradesh and West Bengal eventually provided their native INA veterans their dues  but the tables never turned for the Odisha veterans.  Many of them carried on with menial jobs like running betel shops.  Others took up jobs like jungle clearing, blasting with explosives, driving trucks and certain other small jobs at Hirakud Dam during its construction, following the insistence of the late Biju Patnaik. However, very little was done for their secured future even by the subsequent governments in the state.

After 1972, the state Government started giving them skimpy monthly pensions of Rs 200 which gradually increased in the forthcoming years.

Laxmi Panda, one of the Odia INA veterans, was laurelled the Rashtriya Swatantra Sainik Samman just three days before her death and Ehsan Qureshi, who Dhir refers to as the last surviving INA veteran passed away in 2018.  With this, rests Odisha’s legacy of the Azad Hind Fauj.

Now, the question arises if this legacy will finally be preserved for the later generations to acknowledge or will the unsung heroes of Odisha be forgotten again.