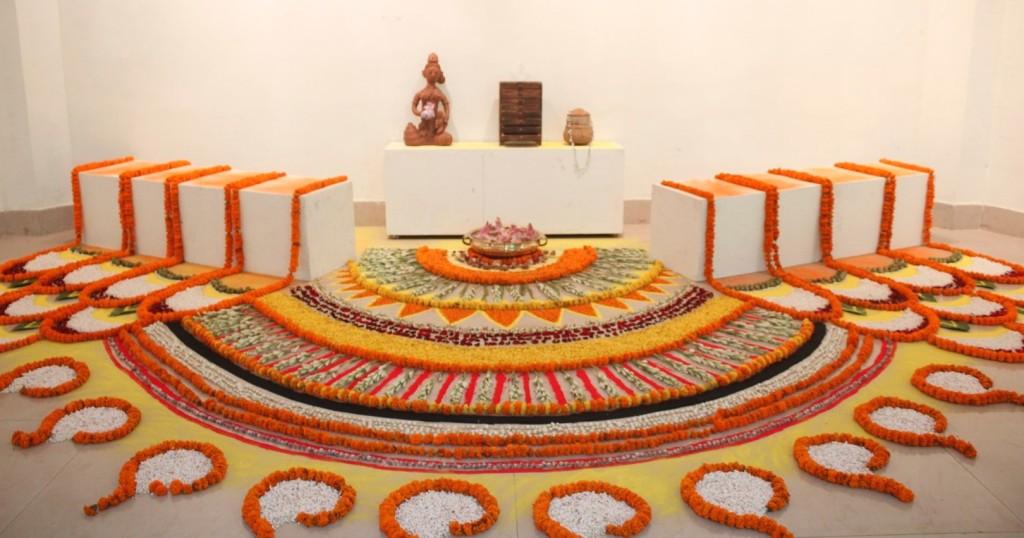 Bhubaneswar: Gone are the days when coloured-powder rangolis made for exquisite displays in one’s home during festivals. One also sees the dominance of intricately created chitaas in Odia households during Lakshmi puja and manabasa gurubara. These days, designs and patterns with flower arrangements aka flower rangolis are have become the favourite during celebrations.

Lalit Kala Akademi (Art Gallery) saw an unique exhibition of rangolis made with flowers by Janhabi Behera, a noted Odissi dancer in the city last weekend. The the floors of the gallery were covered with intricate patterns made using flowers such as lilies, jasmine, rose petals, marigold, rajanigandha and dried leaves. Visitors milled around soaking in the colourful patterns with a hint of floral essence in the air.

Speaking to Odisha Sun Times, the artist said, “I have always been attracted to flowers. They are living manifestations of nature’s beauty. I never enjoy plucking flowers from trees. Yet, the irony is, as dancers, we are always gifted flowers after performances. I bring these flowers home and make a pattern with those flowers so that they do not go into waste.”

This practice gradually grew into Janhabi making rangolis on a much larger scale. People started appreciating her work, especially the ones she made in the lobby of Rabindra Mandap. The initial idea was to upload a simple flower rangoli videos on social media, However, after several encouraging inputs from her friends, she decided to showcase the designs in this exhibition titled Phula Re Phula Re: A Story in Flowers.

Art students ramp up creativity with product design show in…

One can see the influence of Odissi in her designs, such as the motifs of the Odissi ensemble or the expressions of the dance form. Some of the patterns on display were the famous Pasapali pattern, inspired by the classic handloom of Odisha.

Another layout called the Life Cycle, represented four stages of the human life made with four distinct patterns for each stage of life: bramhacharya, grihastha, vanaprastha and sannyasa.

It generally takes her about two hours to complete a single design and she majorly relies on marigold flowers to create patterns. She also draws heavily from the chitaa motifs and techniques for the outline of the rangoli.