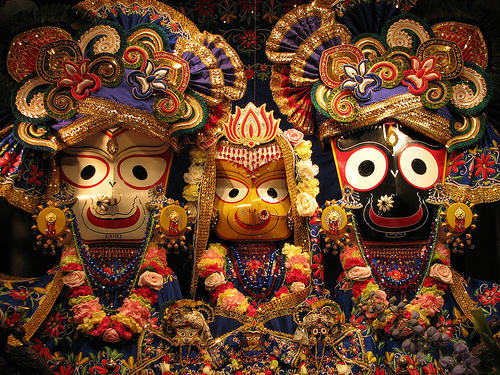 Puri: As a person is attended by doctors and family members when he suffers from ailments, the lords also undergo treatment by their servitors inside Anasara house of Jagannath temple after falling sick (fever) due to holy bath on Snana Purnima.

The idols of deities are treated like human being and the servitors perform their duties accordingly with proper care.

The descendents of servitors Biswabasu and Bidyapati are engaged in secret ritual service of Chaturdha Murti (Lord Jagannath, Balabhadra and Devi Subhadra along with Sudarshan) during Anasara (fortnight-long hibernation from Snana Purnima till a day before new moon day).

According to Ayurveda expert Dr. Deba Prasad Dash, Jagannath temple is a laboratory of chemicals. The service and rituals during Anasara period is the example of such kind. The lords undergo Panchakarma treatment since Snana Purnima to look refresh and evergreen.

There are two types of treatments in Ayurveda — indoor and outdoor treatments. The lords undergo only indoor treatment during Anasara period. They wear white clothes. As the deities suffer from high temperature after sacred bath on Snana Purnima, the doctor attending the lords provide herbal medicines to lower the temperature in the body. Later, the deities undergo treatment for other parts of the body, Dr Dash said.

The services are being provided twice a day inside Anasara house. The phuluri oil has been applied on the bodies to lower the temperature, which is called Swedana. The Osua prepared by Suara servitors has been served to the lords. The women members of the Suara families are also engaged in the service, said Biswabasu Binayak Dasmohapatra.

After Osua rituals, the deities recover from illness. A khali (dough prepared from wheat flour, camphor and sandal) is prepared at three Suaras’ homes to offer to the deities. The ritual is called Shalisasthika Pinda Swedana. The Dasamula is brought from the Baidya (doctor) and served to lords following which the deities attain new youth, he added.

Notably, the patta paintings known as ‘Anasara patti’ of Chaturdha Murti are worshipped in the 12th century shrine during the Anasara period. Besides, the darshan of Patitapabana—the representative image of Lord Jagannath on the right side of the main entrance of temple from Singha Dwara—is also closed. Anasara patti of Patitapabana is also placed in front of the main entrance for public darshan.

After recuperating from illness, Lord Jagannath, Lord Balabhadra and Devi Subhadra moved out of the fortnight-long hibernation and gave darshan to their devotees on Netra Utsav. The darshan of the deities on Ratna Bedi after 14 days long illness is called Nabajouban darshan.