This Odisha-born actress creates buzz on social media. Here’s why 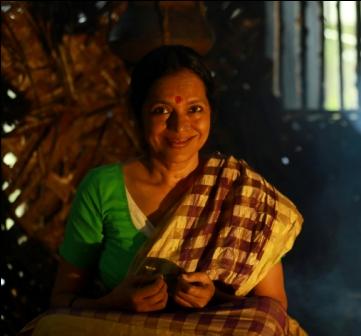 Bhubaneswar: Award-winning actor and filmmaker from Odisha, Bijaya Jena, popularly known as Dolly Jena, has once again wowed one and all. But this time, it is for her looks not acting skills.

The Mumbai-based actress, who has starred in Bollywood films such as ‘Hum Kisi Se Kam Nahin’ and ‘Razia Sultan’ among others, left her fans stunned with photos where she is seen donning middle-aged Tamillian and Malayalee looks.

She posted those photos while shooting for an advertisement in Kerala which required her to dress up as Tamillian and Malayalee women.

Soon after the actress posted the photos on her Facebook account, her fans and well-wishers went berserk and within minutes these garnered hundreds of likes and comments.

While some enquired as to when she can be seen next on the big screen others complimented her saying that she looked like a typical Tamil actress.

Speaking OST, an elated Jena said she felt very happy seeing so many likes and comments on her photos.

“As an actress I didn’t find it very difficult pulling off the Tamillian and Malayalee looks though there is a little difference when it comes wearing sarees and make ups,” the acclaimed actress added.

Jena, who was born and brought up in Cuttack, studied in the prestigious Film and Television Institute of India (FTII) before trying her luck in Bollywood.

She bagged the Best Actress Award for her performance in the Odia film ‘Jaga Balia’ in 1983 and her directorial debut ‘Tara’ won a National Award in 1992.

Having participated as a jury member for many national and international film festivals, Jena is currently working on a film ‘The Survivor’ based on acclaimed Odia novel ‘Dana Pani’ written by Gopinath Mohanty.