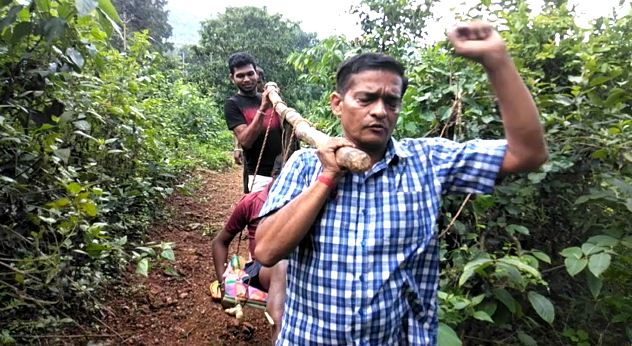 Malkangiri: While kin of patients often accuse doctors of negligence in treatment, a doctor in Odisha’s Malkangiri district has set an example by carrying a patient on sling for 5 km to make the latter board an ambulance.

According to reports, a 12-year-old boy of Nuaguda village under Khairput block of the district was suffering from fever. His family members telephoned the ambulance service for admitting him to a nearby hospital.

However, the emergency vehicle was unable to reach the village due to lack of motorable road. In the meantime, Shakti Prasad Mishra, a doctor working with NGO Arogya Plus, rose to the occasion by carrying the minor boy on a sling for 5 km along with the ambulance driver through hilly terrain and made the patient reach near the ambulance.

The boy was then taken to the Malkangiri District Headquarters Hospital for treatment. Mishra has earned accolades from all quarters for the exemplary act.