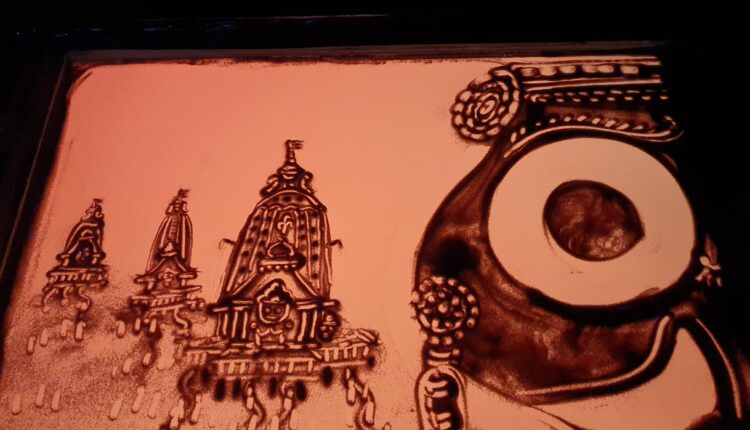 Bhubaneswar: There goes the belief that Lord Jagannath is the Lord of the Devotees, the Lord for the Whole World. Based on this concept, internationally renowned sand artist from Puri, Manas Kumar Sahoo presented a 1 min 30 secs short animated film through his sand art. The film can be explained like this. Just as a devotee is incomplete without his Lord, so too the Lord is incomplete without the devotion of the devotee.

Merged in the bliss of the attention and magical spell of the Lord, the disciple of Lord Jagannath puts his innovative imagination through his sand art. For the sake of all the pilgrims, devotees, people of the World, the three deities of the Jagannath temple come out of the Sanctum sanctorum to give a glimpse through the Car Festival, which is an unforgettable and memorable moment every year. But this year, 2020 faces a contradictory situation. The corona pandemic appeared as a demonic force creating fear in the minds of many all over the world.

While many were busy working tirelessly putting their efforts to eradicate the pandemic, many others have surrendered their urges, their grief, their hopes through their tears and by lighting earthen lamps, And at this very moment the decision by the Supreme Court to stop the car festival has broken down the hearts of many. It is as if the demonic forces have started enjoying their victory over the good.

A period of grief, doubt and fear lurked in the minds of many…….”Will they ever be able to have a glimpse of the Lord this Year”?

And it seems as if the Lord has heard the prayers. Seated on the three Chariots all the deities would be confronting their devotees, Lord Jagannath, sister Devi Subhadra and his elder brother Lord Balabhadra would give their darshan on the day of car festival.

Based on these feelings and concepts, Manas Kumar Sahoo, put everything in his Sand Animated Short Film.

Another doctor tests positive for COVID-19 in Odisha’s Cuttack