Three get Nobel Prize in Physics for cosmic discoveries 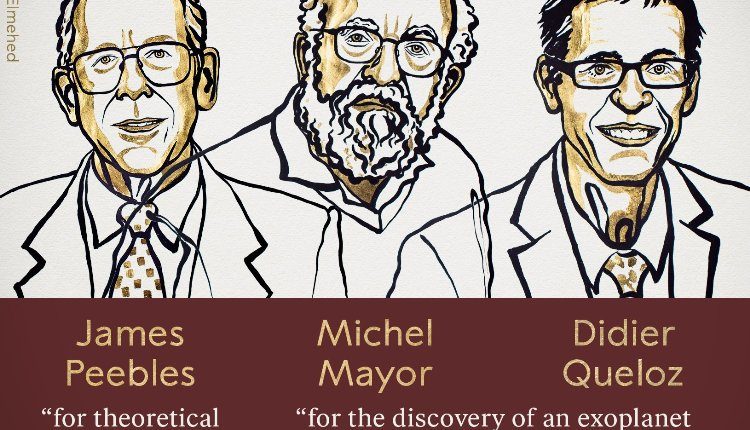 Stockholm: The 2019 Nobel Prize in Physics has been awarded with one half to James Peebles “for theoretical discoveries in physical cosmology” and the other half jointly to Michel Mayor and Didier Queloz “for the discovery of an exoplanet orbiting a solar-type star.”

The three scientists were awarded Nobel Prize in Physics for new understanding of the universe’s structure and history, and the first discovery of a planet orbiting a solar-type star outside our solar system. The discoveries have forever changed the earlier conceptions of the world, said Göran K. Hansson, Secretary General of Royal Swedish Academy of Sciences in a presser.

James Peebles took on the cosmos, with its billions of galaxies and galaxy clusters. His theoretical framework, developed over two decades, is the foundation of modern understanding of the universe’s history, from the Big Bang to the present day.

Michel Mayor and Didier Queloz explored our home galaxy, the Milky Way, looking for unknown worlds. In 1995, they made the first discovery of a planet outside our solar system, an exoplanet, orbiting a solar-type star, 51 Pegasi. Their revolution in astronomy and over 4,000 exoplanets have since been found in the Milky Way.

Monday’s announcement kicked off this year’s prestigious awards, which was followed by prizes in Physics on Tuesday and the ones for Chemistry, Literature, Peace and Economics will also be named in the next few days.

This edition will see two prizes in Literature being announced as an exception, as last year’s were postponed owing to allegations of sexual abuse within the Swedish Academy.

The awards will be presented on December 10, the anniversary of the death of its founder Alfred Nobel, in a double ceremony at the Konserthus in Stockholm and Oslo City Hall, for the Peace Prize.

All prizes include a cash prize, which this year amounts to 9 million Swedish kronor ($912,000).