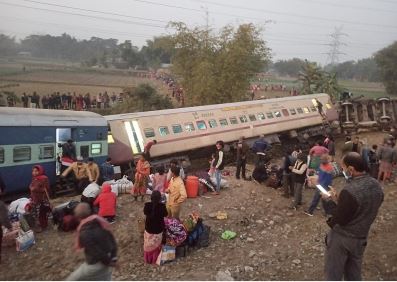 Kolkata: Three people were killed and several injured after four bogies of the Bikaner Express derailed in North Bengal on Thursday evening. The railway authorities have announced a compensation of Rs 5 lakh to the families of those killed and Rs 1 lakh for the seriously injured and Rs 25,000 for the injured.

“Deeply concerned to hear about the tragic accident of the Bikaner-Guwahati Express in Maynaguri. Senior officers of the State Government, DM/SP/IG North Bengal are supervising rescue and relief operations. Those injured will receive medical attention, as early as possible,” Chief Minister Mamata Banerjee said.

According to the railway authorities, the derailment of the passenger train happened in the Alipurduar Division of North Frontier Railway between New Domohani and New Maynaguri stations in Alipurduar district. Train No. 15633 Up Exp left New Domohani station at 4.53 p.m.

The injured were first taken to a government hospital at Maynaguri and the seriously injured are being transferred to the Jalpaiguri district hospital, sources said.

Many passengers are feared trapped inside the derailed coaches and gas cutters are being used to cut open the mangled coaches, according to Railway sources.

Congregations at water bodies in Bhubaneswar prohibited till Jan 16