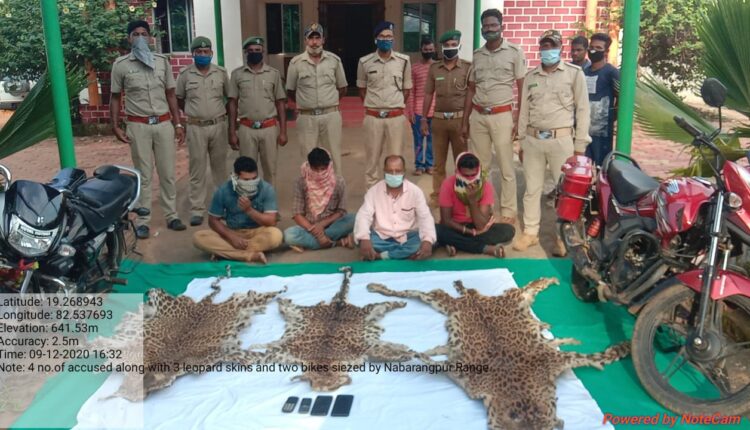 Nabarangpur: In a major crackdown, the Forest personnel seized three leopard skins and arrested four youths in Nabarangpur district on charges of smuggling on Saturday.

Forest officer Magar Dhanaji Raose told media persons a team of Forest personnel intercepted two vehicles at different places in Nabarangpur on basis of a reliable information. When one team intercepted a motorcycle in a bordering area of Kalahandi and Nabarangpur districts at around 11.30 am yesterday, one leopard skin was recovered from the two motorists. The Forest personnel then arrested the two youths riding the motorcycle.

Another team frisked a two-wheeler near Usuripadar Chhak under Nandahandi block in Nabarangpur district at around 3:30 pm. During the search the Forest personnel recovered two leopard skins from the motorcycle and arrested another two youths, said Raose. During both the raids the two motorcycles were seized.

The accused were Surendra Naik and Trinath Naik from T. Rampur area in Kalahandi district and Gupta Prasad and Prahllad Khatiguda from Gariguda village in Nabarangpur district.

Unlock 5.0: States free to decide on schools reopening after Oct 15