Three road mishaps at same spot on NH kills one, injures 6 in Odisha 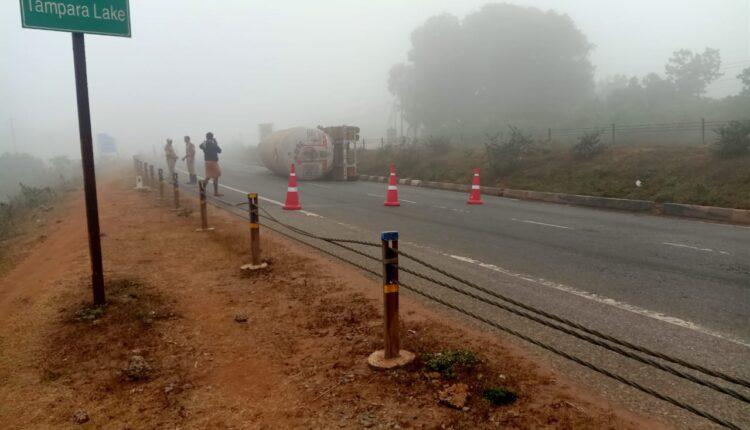 Berhampur: As many as three road accidents took place at same spot on NH-16 near Tampara in Chhatrapur area of Odisha’s Ganjam district today killing a person and leaving six others injured.

A tanker truck carrying LPG overturned this morning around 5.30 AM while the driver sustained minor injuries. Driver of the ill-fated vehicle lost control over the wheels due to low visibility caused by dense fog, following which it turned turtle.

As a part of precautionary measure, police restricted movement of vehicles on both sides of the portion of the road.

Hours later, a police patrolling vehicle met with an accident near the spot leaving five police personnel injured. After finishing the rescue operation, the cops were on their way back when a motorcyclist came in front of the vehicle. To save the man, the driver of the police van took a sudden turn and lost control over the wheels, following which it overturned.

Later, a goods truck skidded off the road and turned turtle at the spot killing its driver. The truck was being parked on roadside by the driver as movement of vehicles was restricted, during which the mishap took place.

JE among three killed in road mishaps in Odisha