Ties between India and UK have never been so strong or good: Boris Johnson to PM Modi 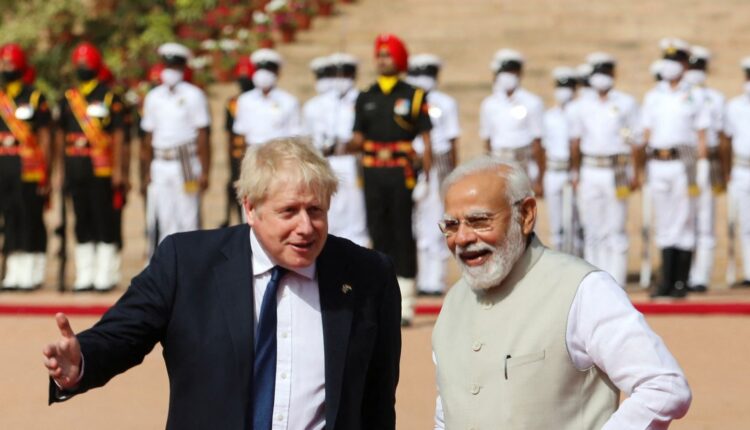 New Delhi: British Prime Minister Boris Johnson termed his India visit as “auspicious” and told Prime Minister Narendra Modi that the ties between the two countries are strong and good.

“Don’t think things have ever been so strong or good between us as they are now,” Johnson told Prime Minister Narendra Modi after the ceremonial reception at the Rashtrapati Bhawan.

He also thanked Prime Minister Modi for a “fantastic” welcome and said his India visit was an auspicious moment in the friendship with India. He also thanked the people of Gujarat for putting up a grand welcome at Ahmedabad.

“I have never seen such a joyful reception. I wouldn’t get that necessarily anywhere in the world,” Johnson further said.

The UK Prime Minister was given a ceremonial reception and a Guard of Honour at Rashtrapati Bhawan where he was received by Prime Minister Narendra Modi.

After his reception, Johnson visited Rajghat to lay a wreath on the Samadhi of Mahatma Gandhi.

The British Prime Minister, who is on a two-day visit to India, will meet Prime Minister Narendra Modi during the day for talks on the UK and India’s strategic defence, diplomatic and economic partnership, aimed at bolstering close partnership and stepping up security cooperation in the Indo-Pacific.

First, he will be holding a meeting with External Affairs Minister S. Jaishankar at Hyderabad House and later will have bilateral talks with Prime Minister Modi.

Johnson reached Delhi late on Thursday night and was received by Union Minister Rajeev Chandrasekhar at the Airport.

The British Prime Minister arrived in Ahmedabad on Thursday, where he was accorded a grand welcome there.

The UK and Indian businesses are going to confirm more than one billion pounds in new investments and export deals in areas from software engineering to health, creating almost 11,000 jobs across the UK, the British High Commission said in a statement.