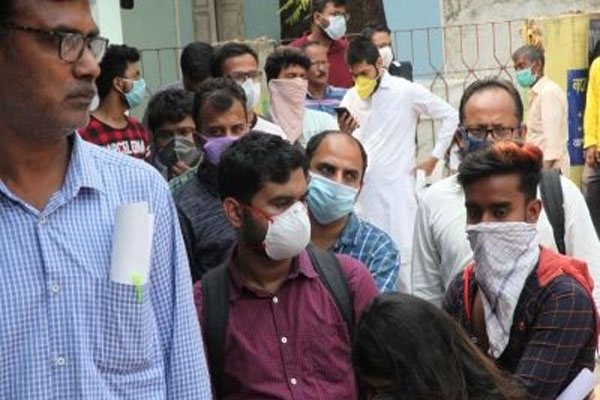 Life is always uncertain as everybody will succumb to inexorably journey of time.  But onset of global pandemic Covid-19 has made our life more uncertain. It has exacerbated the uncertainty factor of life further. Survival of humanity is now in danger of extinction.

But, in such critical juncture, many politicians, rulers, powerful people have not relinquished their arrogance, vindictiveness, belligerent approach, jealousy and unethical practices. There has been allegation by Congress against present ruling class for indulging vindictive politics. If allegation is true, then it is unwarranted and should be shunned fully.  Present time is not for any vindictive politics or rally (virtual rally) for publicity or electoral campaign. Of course, there should be no place for vindictiveness in politics.

It is  also not time for any calumniation or pugnaciousness, truculent approach but need of hour is humanistic approach and all political parties in India and all rulers or head of  various countries around the world  should unitedly fight against ill impact of Covid-19.  But unfortunately this is not happening.

A stumbling economy, crumbling financial system coupled with pervasive unemployment, rising uncertainty of future and a roller-coaster stock market have created the most turbulent period in recent memory.

Prime Minister Narendra Modi’s inelegant response to the pandemic allowed the coronavirus to spread its tentacles. The massive nationwide shutdown to stem the spread of the novel coronavirus has had a destructive impact on the economy. An abrupt announcement of a lockdown disproportionately affected the casually employed, informal and migrant workers leading to a migration crisis where the number displaced is probably second only to Partition.

The latest economic forecasts reinforce fears of a sharper de-growth.  Research firms Crisil and SBI Research were convinced that GDP in 2020-21 will shrink by 5 per cent and 6.8 per cent, respectively. These estimates are in line with foreign research houses that India is on course to witnessing its worst recessions this fiscal.

But if it happens, it will be for the fourth time the country will course through a recession. Incidentally, the past three recessions seen in 1958, 1966 and 1980 were all tied to one reason — unfavourable monsoon, which pounded the economy’s back. This time, however, agriculture, allied sector  which accounts for 17.32 per cent of the GDP, could swing the balance and end up as the last man standing for growth, provided monsoon plays ball.

According to a white paper titled “Focused Interventions for ‘Make in India’-post COVID-19” by the Technology Information Forecasting and Assessment Council (TIFAC), an autonomous body under the Department of Science & Technology, by the Ministry of Science and Technology, India’s overall GDP will take a Rs 14.88 lakh crore hit from Covid-19, which will have a huge impact on employment across sectors.

The 84-page document noted that the global shutdown and quarantine because of the pandemic has severely affected the supply side of the economy without collateral damage to the demand side and has impacted most sectors. The supply side in the sectors of mining, manufacturing, construction, food, entertainment and recreation has been badly impacted whereas in sectors like agriculture, textile, electrical equipment, education and healthcare services, the demand is not so affected. In reality there is demand compression as well as supply disruption.

What is more disconcerting is that according to Google data, India’s economy is struggling to overcome the devastating hit from the world’s biggest lockdown, a series of high-frequency indicators show. From power consumption to jobs to Google’s mobility trends, the figures show activity has picked up from the record slump registered in April, but the recovery has a long way to go.

After declining slightly at the beginning of June, the index has been relatively flat around 76 for most of the month.  It is said that there is only a marginal easing in the index going forward given the latest incremental relaxation of restrictions. Electricity consumption is a widely used proxy to gauge demand in India’s industrial and manufacturing sectors. The figures show a sharp slump in demand for power after the lockdown was imposed, and a slow comeback since then.

According to charity group Oxfam, more people could die as a result of hunger linked to Covid-19 than from the disease. Covid-19 could kill more through hunger with 122 million more may be pushed to starvation. India may emerge as one of the epicenters of hunger owing to the social and economic fallout from the Covid-19 pandemic. The Hunger Virus is the result of the social and economic fallout from the pandemic including through mass unemployment, disruption to food production and supplies, and declining aid.

Danny Sriskandarajah, chief executive of Oxfam GB, said: “The knock-on impacts of Covid-19 are far more extensive than the virus itself, pushing millions of the world’s poorest people deeper into hunger and poverty. It is vital governments contain the spread of this deadly disease, but they must also prevent it killing as many – if not more – people from hunger”. “Governments can save lives now by funding the UN Covid-19 appeal and supporting the call for a global ceasefire to end conflict in order to tackle the pandemic.

Projections based on a recent analysis by researchers at the United Nations University (UNU) show that, in the worst case scenario, 104 million more people in India could fall below the World Bank-determined poverty line of $3.2 a day for lower-middle-income countries. At present, 60 per cent of India’s population, or an estimated 812 million people, live below that poverty line.

Job losses, destruction of informal sector and inadequate government support could push India back by a decade in poverty-reduction progress.  In April, an International Labour Organization (ILO) report published earlier this month had ominous estimates for India’s employment scenario. With 90 per cent of India’s 500-million workforce engaged in the informal sector, the ILO report estimated that almost 400 million workers could slide deeper into poverty. Situation is so grave that just spending of a paltry Rs 2.5 lah crore or little over 1 percent of GDP as stimulus package is too skimpy to make any dent.

However, India economy was already slowing down before Coronavirus decimating economy. Indian economy was in tailspin, tenterhooks and experiencing growth recession. GDP growth has touched 4.5 percent in second quarter of 2019-20, the lowest since March 2013. Economic growth slowed to an 11-year low of 4.2 per cent in 2019-20, against 6.1 per cent expansion in 2018-19.  The budget estimate for GDP growth in 2019-2020 had been pegged at 8.5 per cent.

In the final quarter of the year, that is, January-March, the growth rate of Gross Domestic Product (GDP) fell to 44 quarters low of 3.1 per cent. The COVID-19 lockdown which began on March 25 had only repercussion on 6 days of fiscal 2019-20.

The total employment in India had dwindled by 9 million between 2011-12 and 2017-18, a first in the country’s history, as per paper published by Azim Premji University. The rural poverty had increased with 30 million people falling below India’s official poverty line and joined the ranks of the poor over the past six years.

The nation-wide lockdown and shutdown has not only led to massive contraction in economy, but this has triggered shortfall in realization of resources. In order to raise resources, government has also resorted to aggressive privatization, which is detrimental to interest of nation. It has been taking some anti-people measures like increasing taxes on petroleum prices by taking the advantage of situation as people are not prepared to wage protest now.

It is also trying to change labour laws to the detriment of the interest of working class. What is now reprehensible is that due to shortage of revenues as envisaged, central government has adopted austerity measures and state government have followed suit.  However, it is now time for increasing expenditure not squeezing. This compression of expenditure will not only boomerang but further push our economy in to downturn.

A government is elected to perform not to resort to publicity blitzkrieg.  It should admit failures as it is also part of governance too. It should seek help of others, consult experts, avoid creating emotion, war hysteria, telling lies and giving new slogans to hoodwink masses.  It is high time to analyse which promises government has fulfilled. Where is “Achhedin”, where is “New India”, where is “Sabaka Sath, Sabaka viswas”.  Government should be sensitive to people’s problems.

It is not time to publicize each scheme because government has to spend Rs 30 lakh crore  equivalent to size of budget and who ever rules can float or renew some schemes. The government should   be pro- poor, pro-people instead of pro-corporate and pro-rich. It should and provide health, education free of cost or at cheaper rate, create more jobs, improve standard of livings.

Power, publicity, fame is not everything in life; politicians especially of ruling classes should be sympathetic to suffering masses. They should speak about those vulnerable people instead of planning how to make Ambani, Adani to acquire more wealth and get recognition in Forbes’ list.

They are need of humanistic approach, statesmanship because survival of humanity is at stake and nobody is sure about future. Those who are running after power, wealth, money and publicity should introspect that who will celebrate their achievements and extol their power, wealth, if human civilization becomes extinct.

The author is an Odisha-based columnist /economist/ social thinker. He can be contacted via e-mail at [email protected]