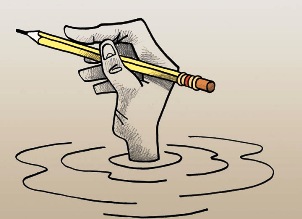 The arrest of three media house owners – Bikash Swain, Madhu Mohanty and Manoj Das – by the CBI in connection with the mega chit fund scam has blown the lid off the best kept secret of the world of media in Odisha. That individuals of dubious credentials but with loads of ill-gotten cash have infiltrated (some would even say ‘taken over’) the media in the state.

We have learnt to live with political ownership of media houses for long. The tradition of leading political personalities or families owning newspapers goes back a long time in our state. The readers know about the man, the group or the party a particular newspaper – and later television channel – is promoting; their political leanings, predilections and their biases are all too predictable. And yet, each has its own loyal band of readers/viewers.

But what we have witnessed in the last few years is an altogether different phenomenon. Scamsters of all hues have made deep inroads into rarefied circles of the media. It has been a two-pronged approach. While some with pots of illegally acquired money have launched or taken over newspapers or TV channels, others have taken the more circuitous route of buying the loyalty of leading lights in already established media houses.

The now defunct STV is as good a case in point as any of all that is wrong with our media. It entered with a bang, offering salaries that had been unimaginable till then. The bait was too mouth-watering to resist for most. No wonder some of the best in the business, who had already established themselves in other channels, made a beeline for this new kid on the block.

And then one day, the whole edifice came crashing down, burying all those who had hopped on to it under its rubble. The highest paid television staff suddenly found themselves without a job. Some managed to find jobs in other channels while others are still without a job. Almost all of them had a job – and hence a salary – before they joined STV. But one error of judgment cost them enormously in terms of loss of earnings and professional standing.

What exactly is it that persuades people – and journalists at that – to commit such elementary error of judgment? An individual, even if s/he is a journalist, can always go wrong in the choices that s/he makes. But how can so many people – among them some of the best known professionals – close their eyes to something that should have been obvious to even a layman with an average intelligence?

The illiterate or semi-literate common man, innocent of the ways of the big, bad world, can be forgiven for being taken in by the glitz and glitter – chit fund czars in the company of politicians, cine or sports stars and other celebrities – and get lured into investing their hard earned money in dubious, get-rich-quick schemes floated by their companies. But how on earth can hard boiled journalists – trained to be cynical and prone to questioning anything and everything – take collective leave of their critical faculties and jump headlong into something without sizing up the possible consequences?

The short and bitter answer to the question is: money talks.

I recall a candid confession by a leading media house owner, who wondered aloud why none of his reporters, who are normally very quick to smell a rat in most things, ever had an inkling about the chit fund scam till the bubble burst. He was honest enough to admit that his own media house had benefited immensely in terms of advertising revenue from the chit fund companies.

[It is, however, nobody’s case that all those who have chosen to close their eyes to the reality have been silenced by the lure of the lucre. There are some who just want to be on the right side of the powers that be because it gives them proximity to the rulers. And with proximity comes power and influence, the elixir that keeps many scribes going.]

It is a measure of the persuasive ability of glib-talking scamsters – or, as the cynics would say, their money – that Madhu Mohanty, one of the three media owners arrested by the CBI for their alleged role in the chit fund scam, managed to rope in the virtual of Who’s Who of the capital’s press to form an elite press club despite his dubious past. His role in the chit fund scam may have come to light only now. But it is difficult to see how those who chose to play along with him could not see what was a scarcely hidden design to buy some respectability and immunity from prosecution. After all, the man was a prime accused in the ORHDC scam. To pretend now, as some are doing, that he was just another member of the club is downright ludicrous. Everybody in the Bhubaneswar media knows that this man was the prime mover and principal fund raiser of this exclusive and expensive club.

It is not as if it was a one-off lapse. This same collective failure to probe deep, unearth the truth and protect public interest – presumably the guiding principles of the media – has been in evidence in case of virtually every major scam in recent memory. For nine long years since the turn of the millennium, we did not know there was a mining scam of enormous proportions taking place right in our backyard. And even after the scam broke in 2009, the media has done precious little to dig deeper and unearth the full dimensions of the loot as it should have done. Much of what is in the public domain about the mining scam today has come courtesy the Justice MB Shah Commission of Inquiry. The contribution of the media in the unravelling of the scam has been minimal. It has been pathetically reduced to reporting things unearthed by others rather than unearthing things itself.

Well, it is possible to argue that Keonjhar is back of beyond for the crème de la crème of Odisha media, which is based in the Twin City of Bhubaneswar and Cuttack. But what about the massive land scam right in the heart of the Twin City? What about Ghangapatna? About the cynical abuse of the discretionary quota provision? Why did the media not bring out any of these scams while they were taking place?

The land scam came into public domain courtesy the CAG. The discretionary quota scandal became public knowledge through the tireless enterprise of a group of RTI activists. The diversion of land given for hospitals and nursing homes for commercial or other purposes and the involvement of a cabinet minister in it was known to us – irony of ironies – through a routine inquiry by the government!

It is a shame that media played no role whatsoever – except to report it of course – in bringing to light any of these scams that were taking place in these two cities where the majority of media houses are headquartered. It has come to a stage where the media is banking on RTI activists to do the difficult job of digging up things, something that should have been its very raison d’ etre.

May be ‘We The Journalists’ have lost the appetite for good, old fashioned reporting. May be we have become so enamoured of the good life that our moral fibres have weakened. May be we have become too complacent to believe that the law would ever catch up with us even if we keep dubious company and enter into dodgy deals with unscrupulous people.

The arrest of Mohanty and Das would hopefully serve as a timely reminder to us in the media about our duties, responsibilities and the high moral standards that the people expect of us. It is a fit occasion for all of us to introspect about the direction in which we are going and to undertake a course correction that would bring back the credibility that has been steadily eroding over the last few years.

*Senior journalist Sandeep Sahu is the Executive Editor of Odisha Sun Times. He may be contacted at sandeepsahu2005 @gmail.com