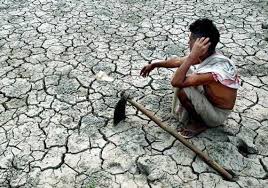 Farmer suicides are endemic in India. How many more lives need to be taken before the government wakes up to address their plight?

Farmer suicides in India are showing no signs of reducing. Every year, hundreds of cases are reported as farmers continue to fight indebtedness. This year too due to extremely dry monsoonweather, there was rainfall deficit which severely affected foodgrain production and cultivation of pulses driving many farmers into distress.

P Sainath, founder of People’s Archive of Rural India, who is well known for his extensive work on India’s agrarian crisis, says among the most affected groups are cotton farmers. At least ten farmers kill themselves every day on an average in Maharashtra while nation wide; farmer suicides are as high as three lakh according to the National Crime Records Bureau.

In Maharashtra’s Vidarbha district, farmers are wholly dependent on cotton. But since the prices have dropped considerably, they end up being debt ridden forcing them to take loans to sustain themselves. Since the cost of fertilizers, pesticides and seeds needed for farming,has gone up, they are unable to repay their debt.

This cycle of deprivation, which drives farmers into distress, has continued over years. A wide range of problems apart from poor rainfall leading to drought like conditions causing widespread crop failure, poor returns since the market value for their products is low and overwhelming exploitation by the industry are the main causes of farmer suicides.

In Aurangabad district in Maharashtra, this year the drought has been so severe that the fields have dried up and farmers are unable to plant seeds. In areas where corn crops were grown, all crops have dried up completely leading to heavy losses because the land is dry and barren with no water.

Aurangabad district is a severely drought prone, where enormous shortage of water and poor rainfall has routinely led to crop failure. This problem has been existing for decades, yet the government has turned a blind eye on the farmer’s misery. Despite the grim condition of the land, no provision of water resources has been made for farmers so that they can engage in farming in their own fields without facing losses.

In September this year, suicide cases among tobacco growers began to be reported. In this case too, mounting debts drove them to take their lives.

In Prakasam district in Andhra Pradesh, tobacco growers committed suicide after they failed to sell their tobacco produce since traders who usually buy their products did not do so this year during the auction. Enraged, the growers set their crops on fire and some chose to end their lives because they were aware they would not be able to repay their loans.

So far, tobacco related deaths reported in the mainstream were usually linked to tuberculosis and cancer among those who were addicted to cigarettes, beedi and gutka. The status of farmers and workers and the impact on their lives largely remained off the grid.

In Murshidabad district in West Bengal, 20 houses are engaged in beedi trade.

Since a majority of men migrate for work, 92% of beedi workers are women who work round the clock to put together beedi stocks. While processing it from morning till midnight, they also inhale beedi, which has a severe impact on their health. A majority of them also get tuberculosis but due to lack of financial resources, they cannot get adequate treatment. Maternal deaths are high. It has been found that a large number of women die by the time they turn thirty-five.

The tobacco industry is mainly labour-intensive. In Madhya Pradesh, a major hub of tobacco farming and manufacture, the situation is grim. In Sagar district, which has one of the highest beedi workers, thousands of women and children are used to make beedi on a daily basis. Despite putting in long hours, from dawn to midnight, their annual income is as low as 141 rupees.

Like in other states, beedi workers in this region are also exposed to lung diseases like TB, eye infections and other ailments. Since their income is abysmally low, overall longevity is poor.

Poor awareness about health care and inability to access hospitals because of the distance and non availability of money, many do not get treated. Besides, there is no provision of health care where they reside because no steps have been taken by the State to oversee the status of tobacco workers or regulate both the industry or the brokers who function as a conduit between the factory and the workers and take huge cuts but pay very little to the workers. The funds earmarked by the government are often not given to them.

Dr Vishal Rao, a well known oncologist based in Karnataka and member of the Action Council Against Tobacco says because of political indifference, overall there is a growing trend in farmer suicides and an increasing number of ailing patients in the field of agriculture, which is largely underutilised in many states. A large number of people suffer both financially and health wise, especially youngsters many of whom die. So far 20-39 deaths have been reported in Karnataka.

Despite several bans on marketing of gutka and beedi, illegal farming is steadily increasing. Many function without licenses. In this Dr Rao says the

The Tobacco lobby, led by the Tobacco Board pushes the industry to control the farmers

This lethal industry, driven by demand and supply continues to control and exploit farmers with the help of fund politics.

Political parties are given substantial funds especially during elections, which provides them with adequate support from those in power and is one of the reasons why the tobacco industry is not regulated.

Farmers are also used emotionally to prevent them from picking up other livelihood opportunities. They are forced to believe that if tobacco farming is banned, they will be severely affected. Fear of losing their only source of income pushes them to continue tobacco growing, which benefits both the middlemen and the industry.

In Karnataka, where a large number of farmers are engaged in the production of tobacco products like cigarette, beedi and gutka, the tobacco industry continues to control and highly exploit these tobacco farmers and workers. While the buyers earn substantial money by selling the products at high rates, the farmers earn meager income leading to heavy high indebtedness since many take loans to sustain their work and are unable to repay them which often leaves them with no other option but to take their lives.

After years of living in penury, farmers in Karnataka are now demanding that in place of tobacco, they want the government to provide them with alternative work opportunities. With the help of Action Council Against Tobacco, letters by 40 farmers have been sent to the State government asking for licence to engage in agriculture and other forms of farming.

Dr Rao says so far only 75% of farmers have been registered this year. The rest have not been given license to farm.

The Role of the Government

Farmers say government officials do not visit villages to assess the situation or address their plight. Even after farmers commit suicide, often no compensation has been paid to the family. Nor are they provided any financial support in case there is crop failure or other form of loss.

What can make a difference is political will. The government needs to come forward and make appropriate policies for farmers to end the inequality both socially and economically across all states. Once policy makers understand that farmers choose to take their lives not only because of debt but also because of the exploitation by the industry.

What the government needs to do is identify weak spots, especially where farmers are the most impoverished, they should be provided alternative farming opportunities and given license to grow crops according to their needs.

For farmers to sustain themselves, handholding is needed. To prevent illegal growing of tobacco, license was taken away only in 10% of farmers. For which remuneration should have been given so that they could take up other forms of farming but that was not done. Dr Rao says that for the farmers betterment security of about two to three lakhs should be given to them so that they can move away from growing tobacco and engage in other farming options like growing jack fruit, cashew, vegetables, food grains like rice and wheat which have better returns and offer stability financially.

Previously the high court had given an order that subsidies should be stopped. For farmers to be able to break the mould, incentives should be given to them along with license to choose whichever alternative farming that they want to engage in like sericulture and horticulture and encourage them by giving them subsidies.

After the tobacco deaths were reported in Andhra Pradesh, the Union Minister of State for Commerce and Industry Nirmala Sitharaman announced a joint package to bail out package for tobacco growers whose produce was rejected in the auction platforms. The Centre also agreed to provide 20 rupees per kilo with the Centre contributing 75% of the quantum (Rs.15 a kg) and the state of Andhra Pradesh bearing the balance 25% (Rs.5 a kg). Ironically, farmers in other states have not received any of these benefits.

Instead of responding to the farmer crisis only after farmer deaths are reported, it is imperative that the government both at the Centre and the State oversee the farmers condition and provide adequate monetary support and licenses to do alternative farming on their own terms so that they can sustain themselves.

Besides, since health and livelihood in the field of agriculture are linked, convergence between agriculture and health ministry can not only alleviate the farmers poverty but with the help of adequate health care at the village level, it can also provide proper care for farmers and their families and prevent untimely death. Only then will the drastic trend of farmer suicides end in India.

* Mohuya Chaudhuri, former senior editor, NDTV, is a Delhi-based independent journalist, researcher and film maker. She may be contacted at [email protected]