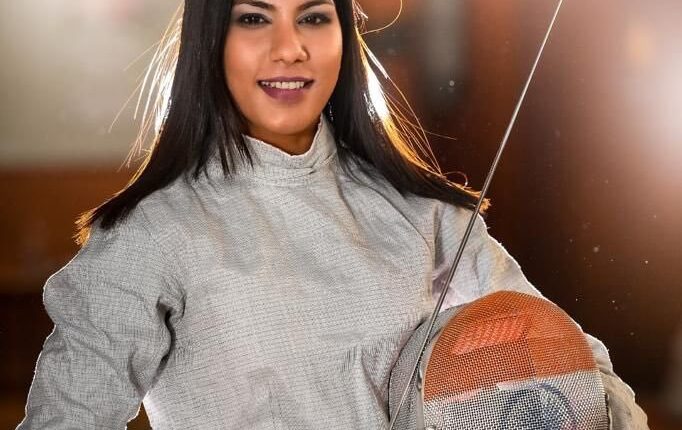 Tokyo: CA Bhavani Devi, the first Indian woman to qualify for the Olympics in fencing, added another feather to her cap as he reached the Round of 32 in women’s individual sabre competition at the Tokyo Olympics on Monday.

Bhavani Devi, from Chennai, outplayed Nadia Ben Azizi of Tunisia 15-3 to move into the Round of 32. She will next meet World No 3 Manon Brunet of France.

The 27-year-old Bhavani, who had narrowly missed qualifying for the Rio Olympics in 2016, got an early advantage in the first period as she raced to an 8-0 lead, defending well, and counter-attacking to score points. She used the ‘right of way’ rule to her advantage as she used her quick reflexes to parry attacks by Nadia and score points.

In foil and sabre fencing, the ‘right of way’ rule kicks in when both fencers touch each other on the same time. As a point could be awarded to only one, it goes to the fencer who had the priority. The priority can be gained by either initiating the attack or defending well or by establishing a ‘point-in-line’ which means that the fencer’s arm is extended with the weapon pointing at the target area of the opponent.

The ‘right of way’ can also be gained with a counter-attack against a compound attack before it is finally completed with a hit while the opponent is still in final preparation.

Taking on an opponent ranked 423 in the world, Bhavani Devi used her strong defence to establish the ‘right of way’ and scored points.

In the second period, having established a good lead, the world number 42, went on the attack and scored points easily to cruise to victory.

Bhavani Devi, who took up fencing at school to avoid classes, came to the limelight when she bagged a bronze medal in the 2009 Commonwealth Fencing Championship.

Bhavani had qualified for the Tokyo Olympics in individual sabre section following the Adjusted Official Ranking (AOR) Method employed after she could not participate in the Asia-Oceania Olympic Qualifying event due to COVID-19 restrictions.

Two individual spots were up for grabs for the Asia-Oceania region based on the world rankings as of April 5, 2021, and Bhavani ranked 45th at that time bagged one of the slots. Her best ranking ever is 36 she achieved in 2017.