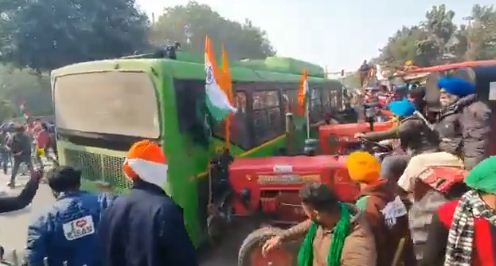 New Delhi: Dramatic scenes were witnessed on Tuesday after the agitating farmers clashed with the Delhi Police near ITO intersection in central Delhi, with the police firing the tear gas shells and resorting to lathi charge to disperse the farmers.

The farmers, who started their ‘Kisan Gantantra parade’ much ahead of their scheduled timing entered the national capital defying the agreement of the scheduled time of tractor rally and creating multiple fronts at Karnal Bypass, Mukarba Chowk, Transport Nagar, Akshardham, Gazipur and Tikri border and some farmers armed with swords were also seen clashing with the police.

As soon as the farmers reached ITO intersection and tried to move towards the Red Fort, many of the farmers clashed with the police personnel and attacked them with sticks and iron rods. The farmers also damaged several vehicles with their tractors.

Following the violence from the farmers, the police fired tear gas shells on the farmers and also resorted to lathi charge multiple times.

After the lathi charge from the police, the farmers left their tractors and rushed to take cover.

Many of the farmers and the police personnel were left injured in the clashes.

Earlier in the day, farmers comprising mostly youths entered the national capital from the Delhi-Uttar Pradesh Ghazipur border after breaking the barricades and clashed with the police near Akshardham intersection of east Delhi.

Some farmers armed with swords were also seen clashing with the police after damaging the trucks and DTC buses that were parked to stop them to enter towards central Delhi.

The visuals of the men riding horses were seen at the Karnal Bypass while the protesters were also seen breaking barricades at Singhu and Mukarba Chowk.

On Sunday, Delhi Police had allowed the tractor rally after the annual Republic Day parade.

Earlier, during the talks with the police, the protesters were told they could not disrupt the celebrations at Rajpath even as the farmers insisted their parade would be “peaceful”.

However, going back on their promise, the farmers broke barricades and started the rally much before the scheduled time.