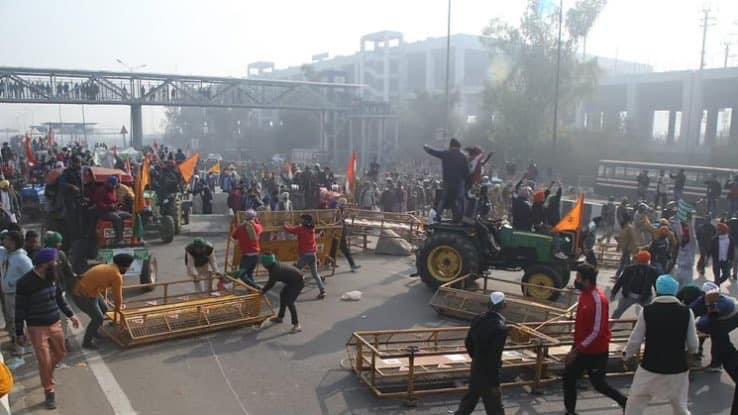 New Delhi: As the farmers’ protest turned violent during their tractor march in the national capital, Internet services in some of the locations in the city were stopped on Tuesday following the government’s instruction to manage the situation.

Almost all the telecom firms in the city were instructed to stop the service until the situation comes under control and further instructions are given.

The instruction was given by the government on the request of Delhi Police that looked helpless in controlling the aggressive farmers who unexpectedly rammed police barricades and moved on towards Red Fort soon after the Republic Day parade concluded.

The telecom operators like Jio, Airtel and Idea alerted their customers through messages about the disrupted Internet services.

The Ministry of Home Affairs in an order also suspended Internet services at Singhu, Ghazipur, Tikri, Mukarba Chowk and Nangloi, along with their adjoining areas, till 11.59 p.m. for maintaining ‘public safety’.

The move came after hundreds of protesting farmers swarmed the historic Red Fort on Tuesday as their ‘Kisan Gantantra Parade’ turned violent at several places in the national capital.

A large group of farmers riding tractors and motorcycles thronged the Red Fort carrying the Tricolour and farmer union flags in their hands. A few youths even climbed up the flagpole on the 17th century landmark and put up a saffron-coloured pennant.

Other video clips showed farmers chasing away policemen on foot as well with tractors, and trying to remove a DTC bus parked across the ITO road stretch by pushing it out of the way with a tractor.

The police fired tear-gas shells and cane-charged the protesters on multiple occasions as farmers remained adamant to move towards the Red Fort.

Later, the Rapid Action Force was also deployed at the ITO intersection.

The farmers, after the confrontation with police that lasted for around 40 minutes, moved towards Deen Dayal Upadhyay Marg, which houses the offices of the Aam Aadmi Party, Delhi Congress and the Bharatiya Janata Party.

Biden calls India, US ‘indispensable partners’ as he extends wishes on…

Farmers to intensify agitation from June 26 against farm…