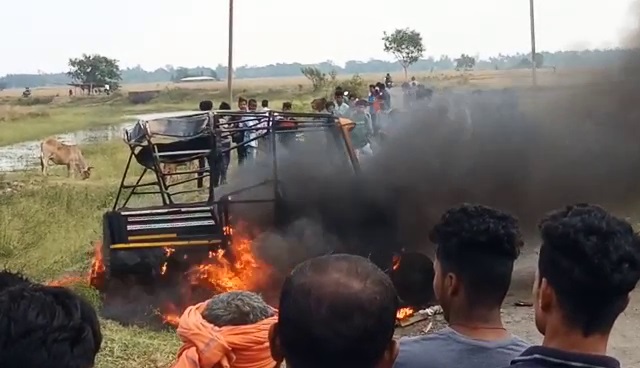 Kendrapara: In a tragic incident, a Class II girl student was killed after a packed auto-rickshaw she was travelling in overturned near Gara village under Pattamundai block in Kendrapara district today.

The deceased was the student of Saraswati Sishu Mandir at Oupada.

Three others including a woman teacher were also injured in the incident.

According to reports, an auto-rickshaw carrying around 20 students was travelling from Gara to school. The incident took place after a cow tied with a rope suddenly crossed the way.

“The vehicle overturned multiple times after being hit with a long rope to which the cow was tied. All the students managed to come out of the auto-rickshaw, however, the girl student remained stuck inside the vehicle,” said a teacher, who was also travelling in the vehicle along with the students.

While the Class II girl student died on the spot, three others sustained injuries in the mishap.

However, the auto-rickshaw driver fled from the site following the incident. Later, the irate locals set the vehicle on fire.

All the injured students were taken to the Sub-Divisional Hospital, Pattamundai, for treatment.

The family of the deceased blamed the auto-rickshaw driver, who left the students midway, for the mishap.

The woman teacher, who is the eyewitness, held the school authorities responsible for the incident that reportedly occurred due to overloading of passengers in vehicle.

“Many a time, I had raised the issue with the school Pradhan Acharya. However, the school authorities had never paid attention to it,” she told media.