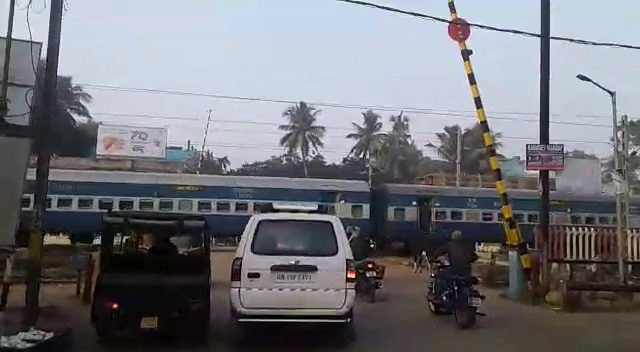 Bhubaneswar: The Railways authorities suspended two staff from their duties in connection with the incident of an Express train passing at an open level crossing gate near Puri this morning.

The Loco Pilot Govind Sahu and Assistant Loco Pilot Umesh Kumar have been suspended from duties, said the ECoR in a release this evening.

The images of train movement from data logger have been taken and it is seen that the train stopped for 1 minute and 50 seconds at the gate before crossing the gate in open condition. Ideally, the Loco Pilot and the Assistant Loco Pilot should have waited till the gate was closed, the release said.

The preliminary findings of the inquiry committee revealed that the crew of the train including the Loco Pilot and Assistant Loco Pilot stopped near the gate for 1 minute and 50 seconds time and then proceeded towards Puri Railway Station with the gate in open condition. They should have ensured that the gate was to be closed thereafter before proceeding towards Puri.

Notably, the East Coast Railway (ECoR) had ordered an inquiry based on a media report showing the passing of 18451 TAPASWINI EXPRESS at an open level crossing.

The incident took place at Sidhha Mahavir level crossing in Puri at around 7.25 am.

An inquiry committee was formed consisting of heads of four departments — safety, signal, electrical operations and general operations for probing the incident.

The probe was ordered against a gateman, who allegedly had not closed the gate at the level crossing. He allegedly placed two red flags but did not close the gate when Puri-Hatia-Puri Tapaswini Express train was going by despite being instructed by the station master.

However, the inquiry committee recommended the suspension of the Loco Pilot and Assistant Loco Pilot.