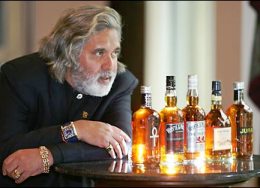 Terming the findings of a fresh inquiry into diversion of funds worth Rs 1,225 crore from United Spirits Ltd (USL) to his firms unfounded, liquor baron Vijay Mallya on Sunday said all transactions were legal, above board and approved by USL auditors and shareholders.

“I can only reiterate that all transactions were legal, above board and approved by USL auditors, board and shareholders,” Mallya said in a statement from London where he has been staying since he left India on March 2.

In a regulatory filing to BSE and NSE on Saturday, the Diageo-led USL said a fresh inquiry by independent experts found Mallya had diverted Rs 913.5 crore to his overseas and Indian firms, including Kingfisher Airlines Ltd and carried improper transactions up to Rs.311.8 crore when he was its non-executive chairman.

Asserting that he had no knowledge of the inquiry by global consulting firm Ernst & Young or charges against him, Mallya said neither USL nor E&Y gave him details of the allegations or opportunity to respond.

“Diageo conducted an extensive due diligence on USL prior to acquiring shares. It is surprising and unfortunate that unfounded allegations are now being made without any reference to me whatsoever,” Mallya said in the statement.

The London-based spirits major Diageo acquired majority stake (54.78 per cent) in the city-based USL in July 2014 and took full control of it after Mallya resigned from its board as chairman and director on February 25 as part of a $75 million (Rs.516 crore) mutual deal.

The USL board, however, clarified on Saturday that the mutual deal with Mallya did not extend to matters arising out of the additional inquiry.

As mentioned to the stock exchanges on April 25, the board initiated a fresh inquiry into improper transactions by USL, which appeared, prima facie, to be diversions of funds to various UB Group companies, including Kingfisher.

“The board noted that only a court or concerned regulatory authority would be in a position to make final determinations as to fault or culpability,” the filing said.

The diversions as well as transactions occurred during the review period from October 2010 to July 2014.

“The overseas beneficiaries or recipients of these funds include Force India Formula One, Watson Ltd, Continental Administrative Services, Modall Securities Ltd, Ultra Dynamix Ltd and Lombard Wall Corporate Services Inc., in each of which Mallya appears to have a material, direct or indirect, interest,” the filing said.

The main Indian beneficiary of the funds was the now-defunct Kingfisher Airlines.

The board has also directed the company to review each case of fund diversion to recover from the relevant parties and individuals. (IANS)