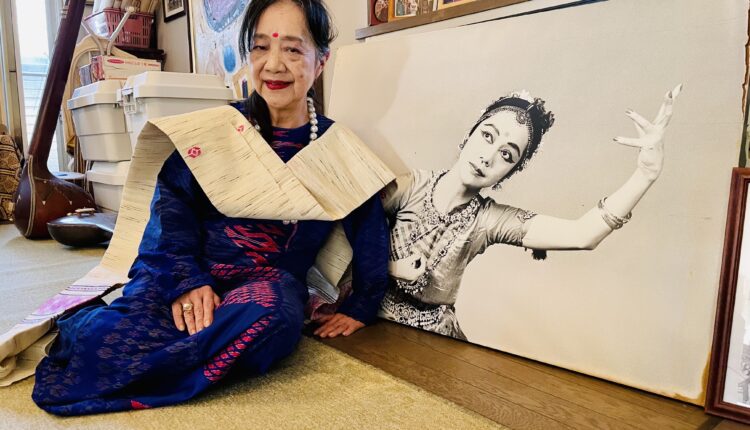 Born in 1940, Akemi Sakurai was a shy seven-year-old when her mother enrolled her in a dance class to encourage her out of her shell. They lived in Tokushima, a region steeped in the culture of dance and theater. Awaodori, the area’s renowned traditional dance had just been revived and ‘Kodomo Kabuki’ groups were formed, all in an attempt to uplift after the dark chaotic days of the war.

There’s a brightening in her eyes and voice as she recollects those childhood days. “Piled into a truck, our troupe went from village to village, visiting rehabilitation centers. One distinct memory I have of this time is seeing Emperor Showa in Komatsushima city.” She recalls: “I sat at the edge of his route into a reception hall, waiting with the other children. And we watched as he walked up a long path, right before us!” Her child-like exuberance is palpable even now.

Raised with this grounding in traditional performing arts, it was natural for Akemi to pursue the field for higher studies. She joined the reputed Nihon University College of Arts in Tokyo. “I learned a lot because I was lucky to have very good teachers.” Among the legends she was fortunate to train under were Fujima Monjuro and Chiyo Hanayagi, masters of Nihonbuyo, a classical dance form incorporating elements of Kabuki, folk dance and Noh.

University life exposed Akemi to the field of arts beyond Japan’s borders. There were artistes showcasing diverse styles and academia debating ideas from different cultures. In 1961, Akemi participated in events marking Rabindranath Tagore’s 100th birth anniversary organized by the local Tagore Study Circle. Remembering the rare Bharatnatyam performance she had seen at her high school, Akemi was intrigued by the idea of studying Indian classical dance. When she heard of a scholarship offered by the Indian Council for Cultural Exchange (ICCR) to study classical dance in India, she immediately applied. The test for acceptance into this program was rigorous and Akemi was unable to clear this in her first attempt. Two years later, with deeper knowledge in her field and improved English speaking skills (thanks to a NHK radio program titled “English for One Million People”) Akemi cleared the test on her second attempt.

“My Nihonbuyo teachers were angry with my decision,” she reminisces. “They didn’t want me to leave but when they saw I was firm, they insisted on giving me intensive classes for one full week before I left for India.” There’s poignancy in her voice now. “They wanted me to be at my best before I left, never mind that they didn’t agree with my choices.”

At the end of a three-week-long voyage by sea, when Akemi Sakurai reached the shores of Bombay in June 1965, she knew she was on the brink of an adventure. On board the ship, she was part of a group of exchange students headed for Paris — she was the only one who disembarked at Bombay. Nostalgia is quickly pushed aside by candid excitement recounting her days in India. “I didn’t know a thing about how my stay was going to be.” Her words tumbling out now at a pace that probably reflects the scale and impact of her experiences at that time. “On arrival in Bombay, I was taken to a small women’s hostel in the university settlement area, where I stayed for one week. It was wonderful. The ICCR regional office organized sightseeing trips around the city and I was really looked after. They then booked me on an ‘air-conditioned chair car’ train to Baroda. I felt special!” The year, however, was 1965 and the Indo-Pakistan war soon broke out. With all studies suspended, the Japanese consulate found her a paying guest accommodation with a Parsi family in Bombay. “It was fascinating for me. Our windows were all papered for the black out, but we would have ballroom dancing every night,” she laughs.

When classes resumed, back at the University of Baroda, she threw herself into learning Bharatnatyam. Enthralled and overwhelmed by this new world she found herself in, Akemi was a diligent student. “I took down every bit of information I could get in meticulous notes and sketches.” Under the guidance of Anjali Mehr, her reputed professor and guru, Akemi began to enjoy her classes. “She was very kind and gave me clear instructions that made it easy for me to understand.”

As it often happens in life, there’s no straight line, but rather a web of interconnecting circumstances that lead you to your destiny. In the summer of 1967, unable to return to Japan for her vacation, Akemi came across a pamphlet for an intensive course in Odissi. “I thought I would try it out, since I was there for the whole summer.” It just so happens that for a student of Indian classical dance, it was a serendipitous choice. An arduous two-day journey across the breadth of India, she reached Kala Vikash Kendra, the dance school in Cuttack, Odisha, where she met Guru Kelucharan Mohapatra.

At the helm of the revival of Odissi, India’s oldest classical dance, Guru Kelucharan Mohapatra played an integral role in shaping this traditional art into its present form and reestablishing its popularity. It was an exciting time and Akemi describes this when she recalls, “The students gathered here around Guru Kelucharan were of different ages, genders…some teachers, masters in their own field…from all parts of India. Everyone wanted to learn Odissi as it was relatively unknown earlier.” Akemi was fascinated by the form and style of this classical dance. “Rather than the straight lines and symmetrical form of Bharatnatyam, Odissi has smooth flowing graceful movements.” 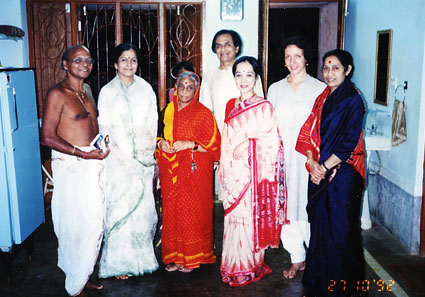 “In my life, Guru Kelucharan holds a very important place. He was the first person I ever called my guru.” An erudite teacher with a passion for his art, Guru Kelucharan made an enduring impression on Akemi. “When I first met him, I thought he looked like Jukichi Uno,” she says, referring to the 50s film icon. “His enthusiasm was so contagious, he had an urgency in his manner of teaching. His ingenuous choreography and intricate footwork was incredible. In a short period of time, I was immersed in the charm of Odissi.” During the next few years, whenever she had the chance, she traveled to meet Guru Kelucharan. She trained with him again on a couple of occasions at Nritya Niketan and Bharatiya Kala Kendra in Delhi.

Akemi continued with her study and training in Bharatnatayam, going on to having her Arangetrum (a graduation performance integral in the traditional format) in 1969, and many recitals around India. On one such occasion, Akemi recalls meeting Guru Kelucharan after a Bharatnatyam performance. “Guruji looked at me and said, ‘Akemi, you’re not dancing Odissi?’ His words pierced my heart. Hands folded and tears in my eyes, I couldn’t form any words at that time.”

Carrying his words with her, Akemi continues to spread his teachings. The school she set up on her return to Japan celebrated its 30th anniversary this year. Teacher and patron now to a generation of Japanese artistes who have been inspired to study Indian classical dance, Akemi still holds precious her days spent with her Guruji. “The knowledge I gained from Guruji, the essence of Odissi that he imparted is alive and well in my heart.”

Eighty-one years old now, Akemi Sakurai has lost none of her enthusiasm. There are no faded photographs in her carefully kept albums. Every photograph, recital invitation and pamphlet of her time in India is diligently preserved and catalogued, and rightly so. It was an experience of a lifetime – the first exchanges between people unexposed to each other’s worlds, connecting and coming together through dance.

The author is a freelance writer and long-term resident of Japan.

Use schools, community halls as night shelters for homeless: SRC to Collectors