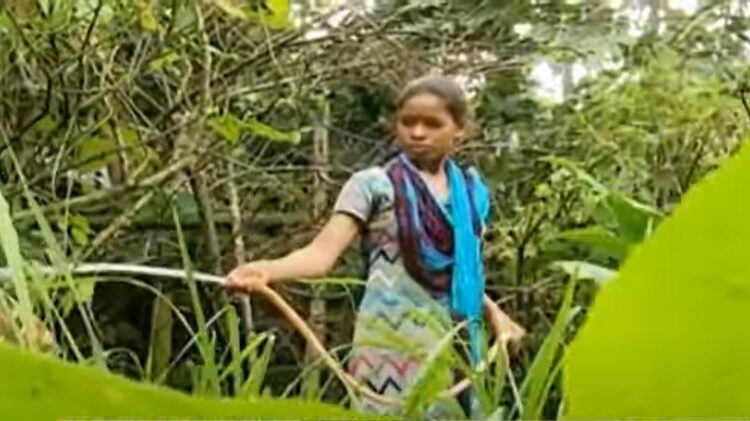 Malkangiri: A tribal girl from remote Bondaghat area became talk of the town after she dug a well with manual labour less than a week in the backyard of her house without help of local administration here in the district.

Malati Sisa, a resident of Bandiguda village under Khairput Block in Malkangiri district and a post-graduate student of a reputed educational institution in Bhubaneswar, set an example for many in the tribal district to solve a long-standing problem that the villagers had been facing since decades.

After finishing her studies in the capital city, Malati returned home in December last year during Covid pandemic. Despite developmental projects for piped water in Bondaghat, she was surprised to see her villagers walking miles to fetch drinking water.

Finally, Malati decided to dig a well in the backyard of her house for drinking water. Her parents Dhabala Sisa and Sambari Sisa and three sisters helped her in the mission.

With help of her sisters — Sukri, Lily and Ranjita — Malati excavated the well just in five days and used the water both for drinking and irrigation purposes.

“There are drinking water pipelines in the village. But, we are yet to get benefit of it. We are getting spring water only in monsoon. In rest of the seasons, we are dependent on stream water or chua (water hole) to meet our requirement,” said Malati.

“Earlier, we were using stream water for drinking purpose. One tube well is here, which is lying defunct since long. Apart from drinking, we are also using the groundwater for gardening,” she added.

As many as 10 families of village are now getting benefits from the recently dug well.

Bondaghat, situated about 5000 ft above the sea level, comprises of more than 30 villages. Since 1980, the State Government has been sanctioning funds worth crores under various programmes for development of people living in the hill area. However, availing drinking water remains a distant dream for the tribals due to apathy of district administration.

However, tribal girl Malati realised it and came forward to address the water crisis with her own efforts. She proved that people can resolve their core issues without depending on administration.

“We can see her (Malati Sisa) as an ambassador to drinking water in Malkangiri district. We are trying to reach remote villages where the residents are facing acute water shortage to develop water bodies under various programmes,” said DRDA Balmukund Bhuyan.

This Odisha woman brings banking services to doorsteps in…