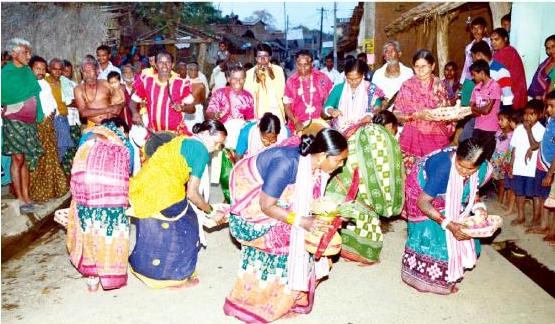 While International Women’s Day is being celebrated today to highlight the success, contribution and stories of women across the globe, some tribal women in Odisha have lived not for themselves but for Goddess by upholding the devadasi system.

Today’s modern women boast of their success, potentials and make their family proud of achieving goals in their career, but there are several women living in the remote villages of the state who make sacrifices to keep their culture and tradition alive.

Betikhai Bariha, Saraswati Bariha, Sabita Majhi, Janaki Bariha, Suruchi Barik and Brundabati Bariha are the unsung tribal women of Kandagarh village under Gaisilat block in Bargarh district of Odisha, who preferred to continue dance as the devadasis for goddess Durga over the wedding proposals. They killed their desire for keeping the age-old tradition alive for their deity. They dance to the tune of lyre, sing tribal song ‘dalkhai’ remaining single throughout their life as part of the devadasi system.

The tribal women, who wanted family, tied the knot and said goodbye to the devadasi tradition forever. But, these six made sacrifices a lot dedicating their life to the deity. With the advancement of the time, they have turned old and now stand alone without family and relatives.

“No need to feel pain about living lonely life. We find peace putting ourselves involved in the tradition. We worship lord. We have dedicated our soul to Dalkhai devi”, said Betikhai Bariha.

These tribal women, who have sacrificed their youth and entire life for devadasi dance, still strive for food. They work as domestic help for livelihood and food. Some get engaged in collecting the Mahuwa flowers in the forest.

“It is difficult on the part of us to earn Rs 100 per day. We left everything for deity but we struggle for food”, said Suruchi Barik.

“But we are not sad about it. The irony is nobody calls us for performing dance before deity as we have turned old”, she added.