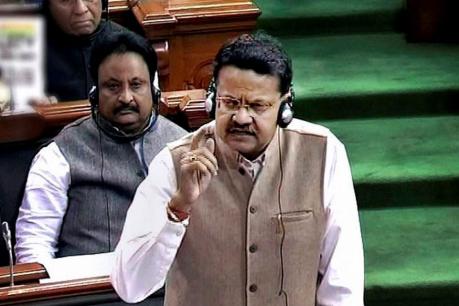 BJD leader Bhartruhari Mahtab said there were many internal contradictions in the Bill and it needs to be redrafted to make it an inclusive one.

“This Bill will only bring more cases in court, government should go back and redraft it,” he said.

Members from the Rashtriya Janata Dal (RJD), All India Majlis-e-Ittehadul Muslimeen (AIMIM), Indian Union Muslim League (IUML), Biju Janata Dal and some other parties spoke against the introduction of The Muslim Women (Protection of Rights on Marriage) Bill, 2017.

No member from the Congress was, however, allowed to speak, as Speaker Sumitra Mahajan said that they had not given a notice in advance to speak on the issue.

Prasad called it a historic day and stated that the Bill was to ensure gender justice for Muslim women.

The Bill was introduced after a voice vote as all treasury benches members supported the introduction.

The Bill criminalises triple talaq, or oral divorce, and has provision for a maximum three year jail term and fine for practicing this form of divorce.

RJD leader Jay Prakash Narayan Yadav said the provision for three year imprisonment was unfair, and said it could disturb the social fabric.

He also questioned the need to create another law for this, while there was an existing law on domestic violence.

“There is absence of consistency with the existing legal framework. The bill says the husband will be sent to jail, and it also says he will have to pay allowance… How can a person in jail pay allowances,” he said referring to the provision that a woman given triple talaq will have the right to seek maintenance.

He said not enough consultation was done on the Bill, and added: “This will be injustice to Muslim women… Make a law where the 20 lakh women from other religions, who have been abandoned, which also includes our Bhabhi in Gujarat, they should be given justice”.

IUML MP E.T. Mohammed Basheer said it was in violation of Article 25 of the Constitution that provides for freedom of practicing and propagating religion.

Ravi Shankar Prasad said: “This law is not about religion, it is about gender justice, the dignity and pride of a woman. The Supreme Court called it illegal, but the practice still prevails. Are not the basic rights of our sisters a part of the basic structure of Constitution”.

The Bill was then introduced in the House, and was to be taken up for debate later in the day.

Speaking outside Parliament, Congress spokesperson Randeep Singh Surjewala later said the party supported the Bill, adding that there was a need to strengthen the law.

“The party supports the law of banning instant triple talaq and we believe that there is a dire need to strengthen this law. We have certain suggestions to solidify this law in order to protect the rights of these women,” he said.

In a written reply to the Lok Sabha last week, Prasad had said that there have been 66 cases of triple talaq in the country since August when the Supreme Court judgment termed the practice as “unconstitutional”.

We are not collecting Indian users’ Aadhaar data: Facebook

Sex videos and controversies in Odisha this year