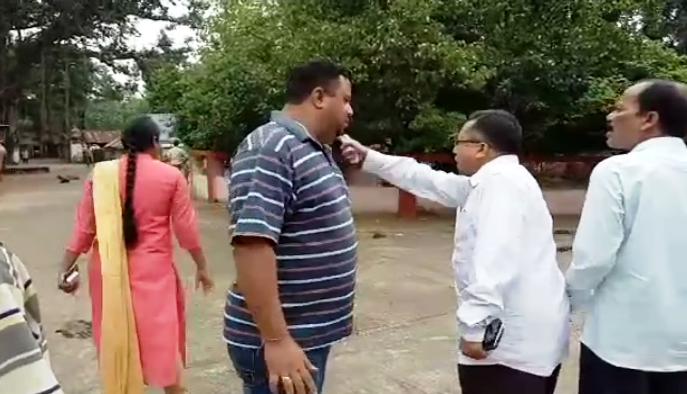 In an FIR lodged at Nilagiri police station yesterday, the Tehsildar alleged that the MLA hurled abuses and even made casteist remarks against her during a demolition drive on the court premises yesterday.

Tudu said, “We were on Government duty and carrying out an eviction for a plantation programme on Nilagiri court premises. The MLA came and opposed it. He could have asked about it properly but he abused me. Forget about Government official, as a lady I got offended by the MLA and his supporter Babuli Sarangi.”

Asked about the ‘misbehaviour’ allegations brought against her by the MLA, she said, “he (the MLA) started it first. Besides pointing finger, he used abusive languages against me and my staff. Since it was a matter of self-respect, I have the rights for self-defence. Yes I pointed finger at him, but have not used filthy language like him. In fact, I never use such languages,” she added.

In a counter FIR, the MLA alleged that he was misbehaved by the woman Tehsildar when he opposed the eviction drive. The MLA had also staged a dharna in front of the sub-collector’s office and was on a hunger stir for over 15 hours. He called off his stir this morning after the district Collector assured him to investigate the entire episode.

Worth mentioning, an eviction drive was carried out to remove constructions of clerks in front of the court at around 8.30 AM yesterday. In the meantime, the MLA reached the spot and opposed the eviction alleging that the constructions were being razed without prior rehabilitation. Later, an altercation had ensued among the MLA and Tehsildar.