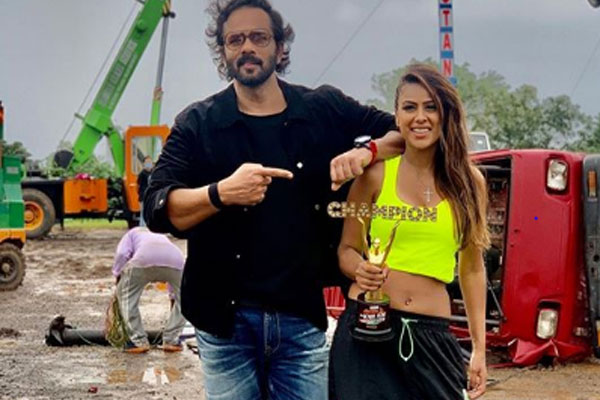 Mumbai: TV star Nia Sharma has won Khatron Ke Khiladi: Made In India, beating Jasmin Bhasin and Karan Wahi in the final. The contest was a special edition of the reality TV adventure game show and it was launched earlier this month after season 10 of Khatron Ke Khiladi concluded.

The Rohit Shetty-hosted Made In India edition of Khatron Ke Khiladi featured champions of past seasons such as Jay Bhanushali, Rithvik Dhanjani, Bharti Singh, Haarsh Limbachiyaa, Aly Goni and Karan Patel. Dhanjani had to quit the contest midway because of commitments.

“Khatron Ke Khiladi: Made In India started off as a fun special edition, but it quickly became my sole agenda to win the season. I gave my all to every stunt that I performed on the show,” said Nia, who has earlier contested in Khatron Ke Khiladi season eight.

The season witnessed the host and action filmmaker Rohit Shetty design some incredible stunts for the contestants. Nia overcame challenges that involved conquering heights, negotiating explosions, swimming through mud and, in one round, surviving a watery coffin. She also made a mark on the Colors channel show with her camaraderie with co-contestants, especially comedian Harsh Limbachiyaa.

“The team always showed immense faith in me and encouraged me to go and give my best. I did not want to let go of the second opportunity that Colors gave me. I wanted to win and I would not have been at ease with any other result. Winning the season brought a sense of happiness and satisfaction. It was also my answer to those people who thought Nia was only about makeup and styling. No, she’s not. She is a winner and she has proven it with this win!” Nia added.

The grand finale on Sunday had a Bollywood-style red carpet laid out for the contestants. The finale stunts involved pythons, spinning stunts at towering heights, and a three-part heist designed specially by Rohit Shetty, where the contestants had to hunt down a necklace to win, amidst explosions, shattered glass, and electric shock.

Manisha Sharma, Chief Content Officer, Hindi Mass Entertainment, Viacom18, said: “Given the fact that we were shooting for Khatron Ke Khiladi in India, we got a great opportunity to incorporate various Bollywood elements to the stunts, while making it more entertaining.”

Abhishek Rege, CEO, Endemol added: “I would like to congratulate Nia Sharma for her win and for giving such an amazing and spirited performance. To create such an impactful show with the constraints we faced due to the pandemic speaks of the creativity and ingenuity of the entire Khatron Ke Khiladi: Made In India team, and we look forward to the next season.”