Twin Towers in Noida to be demolished today; Here’s all you need to know 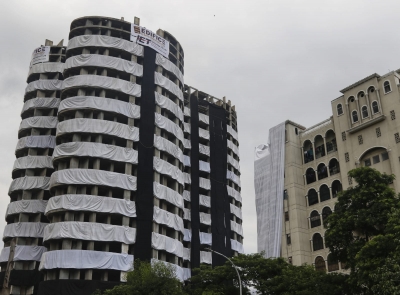 Noida: The twin towers of Noida are set to be demolished on Sunday, which will cost around Rs 17 crore and is the biggest project to be razed in the country by using explosives.

The nine second procedure will take place at 2.30 p.m. The residents of the adjacent buildings have moved to safer places. The airspace will be closed for about 30 minutes and surface traffic has also been diverted.

Mumbai-based Edifice Engineering has been hired for the project and the button will be pressed by Chetan Dutta.

Joe Brinkmann, CEO and managing director of Jet Demolitions, a South African-based firm, which will carry out Supertech’s illegal Twin Towers demolition along with Edifice Engineering and others, said bringing down the twin towers is one of the most difficult tasks since the building is strong and built in seismic zone.

The twin buildings, which comprise 915 flats and are located just nine metres from Emerald Court’s Aster-2 apartment block, have been fully rigged with explosives and wired up.

A seven-member team of Jet Demolitions along with Edifice Engineering will bring down the twin towers with a controlled blast at 2.30 p.m. on Sunday (August 28). This will be the tallest towers to be demolished in the country.

He said, “But we have designed the plan and implemented it to meet the challenges. The progression of the blast — the buildings will be pulled away from North from aster-2 towards the south and then collapse”.

He said that the Edifice Engineering will be handling the debris, which will be cleaned up within three months.

According to the evacuation plan, over 5,000 residents of Emerald Court and ATS Village will have to vacate the premises by 7.30 a.m. They will be allowed to return only after safety clearance from the officials is obtained.

Edifice Engineering has loaded some 7,000 drilled holes with explosives.