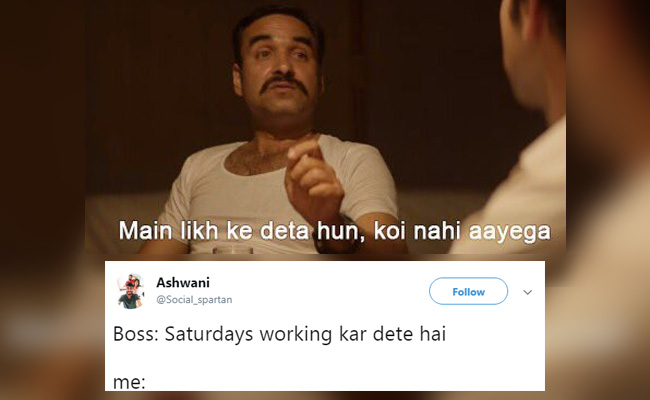 Bhubaneswar: The ever-creative meme makers once again used Twitter to make people laugh and this time the subject is a still from latest Bollywood release “Newton”.

Amit Masurkar’s Newton featuring Rajkumar Rao in the lead may be this year’s India’s official entry to the prestigious Academy Awards or the Oscars but the some people on Twitter posted hilarious and witty one-liners referring to a particular scene.

The acclaimed film shows how a government clerk tries to run a free and fair election in a Naxal-infested area in India.

The scene, which was also a part of the movie trailer, shows Pankaj Tripathi challenging Rajkummar Rao by saying nobody would turn up at the polling booth.

“Main likh ke deta hun, koi nahi aayega (I will give it to you in writing, nobody will show up)” he says.

The scene has now become viral and people on the micro-blogging just can’t stop laughing on it.

The below mentioned are the few of hilarious memes:

Congress workers while talking in private about Rahul Gandhi’s campaign in their area pic.twitter.com/ZM5NoMJsT7

DISCLAIMER:This is a compilation of humour being shared by netizens around the world. Odisha Sun Times neither condones nor endorses any of the views shared in this article here. The subject matter is intended purely as satire.